Everything’s better with a fireplace. Any room in the house – even the bathroom. Any restaurant. Lobbies of buildings. Overnight accommodations of every kind. An outdoor campsite. Conversely, the absence of a fireplace diminishes.  The space without a hearth lacks a heart. 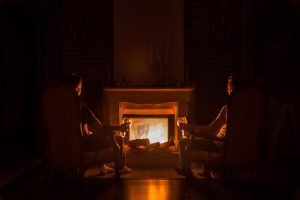 For me, a living space without a fireplace never fully functions as a “home.” Whenever I’ve allowed myself to briefly move into a place, however well designed, that couldn’t boast a fireplace, I wasn’t able to settle there.

I have no way of explaining this deep yearning. The blazing flames in my home fireplaces warmed my heart more than my limbs.  For that, I’ve been dependent on central heating. Gas or electricity provides the heat necessary to prepare my food. Yet, there it is – the pull of the hearth, an instinct burned into my DNA that thrives beyond necessity.

When I recounted the story of our disastrous honeymoon in an earlier blog post, the one pleasant moment in the story pictured me ensconced before a huge stone fireplace, settled into a big, soft couch, my injured leg propped on an ottoman warmed by the blazing flames, whose fiery dance held me mesmerized.  For that brief period, I could forget my pain and disappointment.

Why did the lodge have that gigantic hearth?  It certainly didn’t need it.  It was well warmed by a central air furnace. Yet, you know as well as I do, that no self-respecting ski lodge can hope to be successful without an apres-ski spot to gather around a fire – oh, sure, there can be a bar.  In fact, there must be, but it could be fatal to not also include a fireplace.

This is the same mystic that lured Jay and me into abandoning a relatively spacious one-bedroom apartment with a dining room and an eat-in kitchen in Rogers Park in the Spring of 1968 to move to a more expensive, much smaller apartment at 747 North Wabash.  As I write, that address sits smack in the middle of a very high-rent district of Chicago. When Jay and I made our move, however,  the area was a bit on the skids.

Rush Street, once the center of Chicago nightlife, had lost its luster. Its brightest lights were those of the all-night laundromat.  Shops on Michigan Avenue had boarded up windows and moved to the suburbs. For us, what the neighborhood lacked in glamor, it more than made up for in Bohemian allure. Our new home, a studio apartment, had been built in the 1920s as a haven for artists. Bouncy cork tiles covered the floor. The ceilings soared twelve feet overhead, and three mammoth windows flooded the room with unwavering light. Best of all, and the true reason we moved, the main wall featured a wood-burning fireplace.  Never mind that it didn’t actually have a kitchen per se.  Rather the tiny oven and fridge were stuck in a closet as were the narrow sink and the two-burner hot plate.

Moving to that apartment marked a major shift in our lives. Jay had not only finished law school but had passed the bar and was a practicing attorney. Earning my bachelor’s degree freed me from attending classes and paying tuition. I took advantage of my liberty to sign onto a less secure position – that of an associate editor/secretary at a trade magazine whose office was walking distance from our home.

No longer obligated to spend our evenings studying, Jay and I created our own version of the bohemian lifestyle. True, we both had regular jobs with demanding hours, but those were our only obligations. Childless children of healthy parents, we utilized our nonworking hours with lively abandon. At night we crawled out our window and onto the roof of the building next door and drank cheap wine while gazing at the Chicago skyline eight blocks away. And we left the windows open at night and burned small cozy fires even in the summer.

For a year, we relinquished our biggest concern – our infertility. We allowed ourselves to completely relax into being “just the two of us.” With both of us working, we could afford an occasional meal out and the neighborhood offered a plethora of choices. The best possible entertainment was happening just three blocks away.  Michigan Avenue was awakening from its mid-twentieth century slumber.  Every day, the John Hancock Tower rose higher and higher against the crisp blue of a Chicago winter sky.  By the time, construction topped off in May 1968, many of the boarded-up storefronts along the “Boule Miche” had shed their shutters.  New retail shops and restaurants joined the stalwarts who had held the fort through the hard times.

It wasn’t, of course, just our little neighborhood that underwent a titanic transformation that spring. A multitude of new winds swept the country and the world in 1968. Some were strong, fresh winds of new ideas. Other malevolent storms brewed in hatred and fear. All restructured the world Jay and I knew as children.  When we did finally become parents, we confronted far different challenges than our parents could ever have imagined. Many engendered by the changes of 1968.

How those major shifts engaged and altered ourselves and our lives is a tale for another post. But then, as now, we continued to find solace by curling up and contemplating the brightly leaping fire.

It seemed — in 1968 — the possibilities of peace and brotherhood could be realised that very year. We’re still working on it.

It’s Not REALLY Winter unless …

Winter no longer regularly serves up blizzards for me. Winter reality in the Willamette Valley of the Pacific Northwest can be chilly, will certainly be wet, but snow is a rarity.  So, rare that quite a light snowfall can close the schools and make the hilly streets of Portland undrivable. Inevitably, of course, that causes those of us who have migrated here from hearty climes to laugh at this city’s citizens who freeze up right along with the temperatures.

Snowstorms and blizzards created many of my best memories. One of the

most outstanding of these hit Chicago the third year Jay and I were married. The snow already fell steadily in large, lacey flakes as I trudged home from the Morse Ave “El” stop to our Roger Park apartment at the corner of Ridge and Pratt. Jay, who had driven our faithful Beetle to his job as an Assistant State’s Attorney on the southside of the city left work at six, but traffic was so bogged down, he didn’t push through our door, covered with snow, until 8 p.m.  I was extremely relieved to see him.  The TV reports were dire. (It’s when I remember such an anxious time that I am a little bit thankful for cell phones.)

Snowstorms were a known quantity in Chicago.  We fully expected to awake the next morning to find the streets plowed, sidewalks shoveled, and people grudgingly trudging off to work, muttering “Thank God, It’s Friday.” 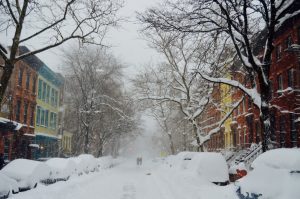 Twenty-three inches of snow fell that night and the blizzard only abated somewhat as the sun rose on a city transformed into an alien arctic world. Jay and I were fortunate to have made it home. According to Chicago Tribune stories about the storm, thousands of people were stranded in offices and schools. Approximately 50,000 vehicles and 800 CTA buses were abandoned on the streets – and then buried in the snow.  All public transportation, including the elevated commuter train, was shut down. (https://www.chicagotribune.com/news/ct-chicago-blizzard-1967-20170125-story.html)

The event was reported to be a disaster for adults, but a holiday for children.  By this standard, my husband and I, although 24 & 25 years old at the time, landed squarely in the kid category.

As soon as the snow stopped around ten in the morning, we triple-layered ourselves into the warmest clothes we had and headed out looking for adventure.  And, wow, did we find it. Heading east toward Lake Michigan a little less than a mile from our home, we laughed as our feet sunk deep into tundra at every step. But burning high energy kept us warm and encouraged.

Our quest took us to a winter wonderland.  Along the lakefront, mighty

storm waves had frozen and then mixed with snow to form caverns and natural forts in every possible shape. And all through and over this enchanted stark white city swarmed children of all ages. Their brightly colored snowsuits flashed red, orange, blue, green and violet as they careened down icy slides and jumped off the tops of hardened mounds into piles of softer snow. Their laughter rang loud and clear in the crisp, frigid air.

We longed to join them but were curious about the rest of the city. Leaving the lakefront, we headed south to Lake Shore Drive.  It was almost impossible to discern where the beach ended and the road began.  The only real clues were the dozens of vehicles stranded poking up at various angles through the drifts along the expressway. Across this kaleidoscope of jumbled cars, buses, and small trucks, the city skyline edged a sharp line against a pale blue sky.

As a phenomenon of the blowing winds, just beyond the drive, a path of

sorts was scooped through the mountains of snow on either side.  With the foolhardiness of youth, we decided to head for the Loop. It was crazy, no doubt about it, but going back to the confines of our tiny apartment when this once in a lifetime experience had happened right outside our front door didn’t feel like even a remote option. We were not alone.

Hundreds of other Chicagoans also came out to explore the magic.  Everyone spoke to everyone else. And although Chicago is a friendly city, ordinarily strangers pass one another by.  But not that day.  That day there were no strangers in Chicago.  The blizzard formed us into one strong community sharing a common experience.  Suddenly we had lots to say to one another.

Jay and I began our trek shortly after ten that morning.  By three o’clock, we were just wandering into Old Town, which lay nine miles from our home. That’s when the angels, who were guarding the city that day, came to our rescue.  Although the blizzard had closed most businesses, many Chicago taverns had remained open – all night.  They were still buzzing the next afternoon.  Neither the bartenders nor most of their patrons could get home. Thus, the taverns had become temporary shelters.  One of these, Piper’s Alley on Wells Street made room for us.

Sometime later, my memory is hazy about that part for obvious reasons, we stood in the long line at the payphone to call Jay’s fellow Assistant State’s Attorney and good friend Danny Weil.  Danny had an apartment above another Wells Street Tavern.  His couch served as our bed for the night.  By Saturday morning, the elevated train was working, if somewhat sporadically. Our adventure was over – but we learned another of Love’s Lessons well – sharing tough times with someone you love can transform hardship into splendor.

We’d love to hear of a time when what could have been disastrous turned into a grand adventure for you because you were together.  Hope to hear from you.