A certain romantic mythology often draws young people to the artist’s life.  Estelle Ford- Williamson was no exception. As a teen, growing up in Chattanooga, TN, she dreamed of being a writer so that she could live her life as Hemingway had. Like him, she would be a journalist who traveled the world reporting on major crises, all the while writing terse, fascinating novels and stories (although her Catholic school girl self wasn’t sure about having multiple love affairs as he did). Her dream focused on the excitement and the adventure of his life.

The Right to Know the Truth

Her perspective changed when she had the opportunity to meet The Chattanooga Times managing editor, John Popham, who as a journalist in the 50s covered the Southern United States for The New York Times. His impassioned words extolling the obligation of the reporter to bring the truth to the people no matter what the difficulties nor who opposed them moved her to tears.  She had a whole new vision of what her life could mean. This compelling notion of a responsibility to the truth took full steam as she attended college during the turbulent 1960s.

life in the “real world”

It was so powerful, in fact, that she left Saint Mary’s, the women-only college she attended, before she graduated. She had a plan to take her elective courses in Chicago so that she could live in the “real world.”  Working during the day and taking night classes at Northwestern University, a school renowned for its journalism program, she completed her degree requirements and graduated from Saint Mary’s College the next year. During the Chicago blizzard of 1967, two events undermined her determination to live and work in the north.  A friend’s car, which had been buried by the historic two-foot snow, was plowed away.  And a letter arrived from her mother with a dogwood blossom folded in the pages.  She headed back to her beloved South.

Almost by a fluke she landed a job with the global news agency, United Press International, in Atlanta. Her boss mistakenly interpreted the credits she had earned at Northwestern to mean she had graduated from that prestigious journalism school. Over a beer, the man learned he’d read the application wrong, but as she had been reporting for a while, she kept the job. Two years with the agency taught her to synthesize information quickly and to view events from a broad perspective.

Wanting to start a family, she left the agency.  While her daughter grew, she worked for several government agencies and non-profit groups, writing newsletters and research papers. Working for the city of Atlanta brought her in contact with several leaders in the Civil Rights movement and led Estelle into an active role in equal rights advocacy.

Estelle returned to school and earned a master’s degree in Psychology. Her coursework served not only to deepen her writer’s perspective, but also led to new work experiences as a management trainer and career development specialist. She performed workshops, helping people learn to communicate with one another within corporations and assisting people transitioning from one job to another. On the side, she kept up her interest in writing by editing and publishing three of her aunts’ memoirs about their lives in North Georgia.

what she least expected

Then a cloud with a silver lining blew over her horizon. Felled by Chronic Fatigue Syndrome, she lacked the energy to work full time. But because it wasn’t her nature to simply sit around, she began reading from her grandmother’s trunk, which contained memorabilia and family writings from that woman’s family. She also came across a detailed genealogy constructed by a great aunt that covered multiple generations of family. She began writing a story of fictitious characters who lived in the same period. Sometimes she wrote with her eyes closed due to the persistent fatigue.

Writing was a quest for Estelle. There were years of research. She hunted in schools, libraries, archives, and museums around the South. She collected not only data but information on valuable material culture—house furnishings, clothing, blacksmithing, rifle making. 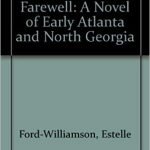 Research was interwoven with writing. Several short courses in creative writing and many years of writing in groups helped her develop chapters of a historical novel. An excerpt won a top novel award at Sand Hills Writers Conference. Published as Abbeville Farewell, the story is a saga about family and moral conflicts in pre-Civil War Atlanta and North Georgia, but it also examines the state of the nation’s conscience in the mid-nineteenth century. It was nominated for the 2002 Townsend Fiction Prize.

Time to begin working on a second novel. But no.  A friend insisted that she meet a young man who was struggling to write his memoir and could use her help. His name was Majok Maier. As a child, he had escaped from Sudan during its bloody civil war. Of course, Estelle was intrigued. Four years later, MacFarland and Company published the book, Seed of Sudan: Memoir of a ‘Lost Boy’ Refugee co-authored by Ford-Williamson and Maier.

Its gripping narrative reveals how tens of thousands of boys like Majok fled from the Sudanese Army. They survived on grasses, grains, and help from villagers along the way. They had to  walk nearly a thousand miles to refugee camps in Ethiopia and Kenya before immigrating to the United States.

a mission as much as a book

The research for the book took Estelle all over the US to interview the young men. Research also took her to multiple libraries to gather and verify the book’s necessary background information. After publication, they held book readings in New York, Ohio, and D.C.  In all those place they met with other Lost Boys who’d settled across the US.

Majok and the other boys’ stories are very poignant and disturbing. These young men felt the need to help change conditions in their new home country, South Sudan.  So, Majok, Estelle, and valuable supporters formed a non-profit organization. It raised funds to build clean water wells in rural villages in South Sudan. (http://www.wellsforhope.org).

After the intensity of getting these under way, Estelle 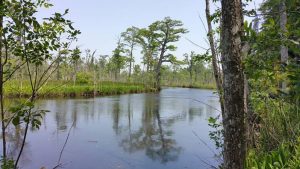 needed a place to quiet herself. She found it in the wetlands along the South Carolina coast. At a home she and her husband purchased, they retreated far from crowds of people, perched on a coastal river.  Her fellow citizens are many species of wildlife that inhabit the area.  Now, at last, she has written the novel she dreamed of, a contemporary narrative.  Rising Fawn not only gives us a twenty-first century protagonist, we also find in its pages a confluence of the many streams of Estelle’s life–faith, natural wonder, and a family’s past–merging together to form a powerful narrative for our ever-changing future. 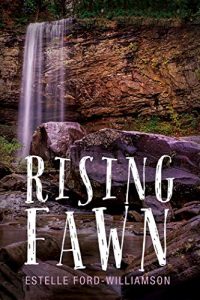 Estelle’s girlhood dreams of becoming a second Hemingway didn’t pan out. Her multidimensional achievements are, however, a unique outstanding contribution to the literary world. She’s been awarded fellowships to arts residency programs.  Her teaching accomplishments include readings and workshops for Poets and Writers, Inc. and the Pat Conroy Literary Center. In addition, Estelle enjoys teaching writing to at-risk youth as well as retired adults. A special delight for her is that as her books received critical acclaim, they continued to find new readers.  Those readers have proved to be a faithful and engaged group with whom she communicates regularly.

Among them may very well be a young girl, who dreams of growing up to be a writer like Estelle Ford-Williams.

“Is there a place you can go to break away for a little while? If you haven’t yet built your tree house, it’s never too late to start.”
― Gina Greenlee, Postcards and Pearls: Life Lessons from Solo Moments on the Road