One of the principles I outlined in the post in which I outlined the themes of this blog was partnership. https://julewardwrites.com/committed-relationships/marriage/new-year-new-beginnings.  For me, partnership signifies that while Jay and I recognize that we are not meant to “complete” each other, we do realize our marriage works best as a cooperative. With two typically developing children and two children with special needs, working in partnership proved to be a key ingredient in creating a “good enough” family.

Siblings of children with special needs have many advantages, but they also shoulder tremendous burdens that are not easy to talk about. This is true not just because they are challenging and difficult, but also because they can be quite subtle.

Halloween: A holiday of contrasts

Halloween brought the differences between the two “halves” of our family into sharp contrast. Kristy and Johnny remained essentially remained toddlers in heart and mind all their lives. They didn’t quite “get” the rationale behind their costumes, but enjoyed the attention of “dressing up” on the night of

Halloween. They then accompanied their dad around the block. He rang doorbells and urged them to say “Trick or treat,” which they sometimes did and more often did not.  Neighbors smiled and complimented their costumes and dropped candy in their plastic pumpkins.  Often, Jay ended up carrying the pumpkins home and usually he rounded up the ritual after about a half dozen houses. That was fine with them because as soon as they returned home, they got to eat some candy, the one part of the whole rigamarole that actually made sense to them.

Carrie and Betsy, however, took to Halloween with a fervor that would have done their Druid ancestors proud. Of all the year’s holidays it was, hands down, their favorite.  Yes, they greatly anticipated Christmas. They loved getting a pile of new gifts and enjoyed getting together with the big extended family for dinner. But Christmas’s traditions lacked the mystique of Halloween. It was a time that sanctioned breaking the rules. Most of the year, we taught our children the expectations and responsibilities of the society into which they had been born. As they grew, the rules became more demanding.  Most parents do that, but Jay and I had to ask more. We expected them to be more empathetic, more responsible and more resilient than other children their age.

Thus, a holiday that invited them to do all the things that were normally forbidden sparked their imagination and kindled their creativity into a fireball of activity. As much as they anticipated acquiring a huge hoard of candy, that wasn’t the main focus of their excitement. What really got them going was

planning to wear the best possible costume possible. They were quite dedicated to crafting their own Halloween attired because they valued originality.  They determined to take on a unique character, one entirely different than any other child of their acquaintance. It was a project that often began no later than October 1 as I mentioned in last week’s blog post. https://julewardwrites.com/committed-relationships/marriage/celebrations/celebrate-october

over the top creativity

The ambition led to the “Year of the Giraffe.”  Our daughter Carrie’s closest friend Thea matched her enthusiasm for creativity. They often turned our basement playroom into wholly other worlds from space stations to Sherwood Forest. So it was not surprising that for their ninth Halloween, they decided to be a giraffe. Their vision and zeal was astounding in two such young artists. They decided to create their giraffe from paper mache.

Making even a small object using this technique takes numerous supplies, careful planning, and enormous patience.  Yet these two little girls were planning to make a human-size (albeit child-size) animal with this technique, guided by a library book.

Thirty years later, I would visit the beautiful baroque town of Lecce, Italy. There I watched in fascination as artists fabricated beautifully intricate statues using the art of papier–mâché. Even a small piece took them several days to complete, and they had trained since adolescence in this craft.  I thought back to those two little American girls, once again flabbergasted at their bravado.

Carrie and Thea conceived a plan where Thea would be the front half of the giraffe and Carrie would be the rear.  Thea would work the giraffe’s mouth, begging “Trick or treat,” and opening its jaw with a lever. She’d hold a box for the candy to fall into. Carrie’s job was to hold onto Thea’s back and wiggle the giraffe tail in “thank you.”

Once their plan was complete, they set to work. Thea’s family generously offered their basement as a work space. The girls used chicken wire to fashion the head, the neck, and body of the giraffe, which would extend just past Carrie’s shoulders. With Thea’s dad’s help, they put the lever in place for opening and closing the mouth. Next, they dipped strips of newspaper into a mixture of flour and water and draped them over the form. It took several layers and they had to wait for each to dry.  The final piece really looked quite giraffe-like. They spray painted it and drew on the eyes. Their last task was the easiest. We had bought them gold-yellow turtleneck shirts and tights.  They drew, a giraffe-coat pattern on these with markers.

They only just managed to finish the day before Halloween. They brought the 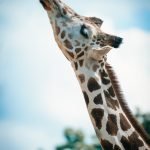 costume to our house and practiced prancing from the kitchen, down the back hall, through the dining room, into the foyer, and into the living room.  There were a few glitches, but eventually they had it working like clockwork.

The next day by the time my children arrived home from school, it was pouring rain. Surely, Jay and I told each other, it would let up by dark. But it didn’t. We decided to pass on taking Johnny and Kristy out.  Betsy and Carrie were undeterred.  Thea came as soon as her mom would allow her.  With Jay and Thea’s dad holding umbrella, the two girls slipped into the costume and started down the sidewalk. Drenched children in dripping costumes trod up and down the steps of the Victorian rowhouses, a task that wouldn’t have been easy for a two-person giraffe under any circumstances, but one made almost impossible by the downpour.

Still the girls pushed on. Slowly the giraffe dissolved around them, strip by

strip, it slid to the ground until they had to concede defeat. What was left of the giraffe was shoved into the trash can on the way into Thea’s house.  Her mom hustled them into dry clothes and gave them steaming cups of cider to drink. Both girls were too disheartened to even cry. Thea’s brother offered to share his candy. They didn’t hear him.  Finally, Thea’s mom called us.  Jay went for Carrie. She didn’t want to talk about it. After all what was there anyone could say?

Even now the memory churns up so many conflicting emotions – pride and sympathy, disappointment and admiration.  And, of course, the knowledge that there would be other Halloweens, other celebrations.  It’s a lesson the whole world is learning every single day in 2020.

Have you watched your child experience disappointment and defeat? Can you share the story?

“There is a child in every one of us who is still a trick-or-treater looking for a brightly-lit front porch.”

One Reply to “A Different Kind of Family: The Year of the Giraffe”