In my heart of hearts, if I could wish away the season of Advent, I would.  I have never been able to “make it work.” Within my faith tradition, Christianity, Advent is one of the holiest seasons of the year. During the month before Christmas, our church calls us to fast and pray, to give alms and burn candles as we await the coming of the Light of the World, Jesus Christ. Although Jesus came into human history over 2,000 years ago, every year on the date, designated to celebrated his birth, Christians all over the world prepare to welcome him into their lives once again.

So, why would I vanquish such a sacred time? Because I live in a time and place where my culture overwhelms the spiritual meaning of the season with rampant worldly festivities, ones that lift me up and carry me through the dark, cold days of winter. Sadly, although most of this merrymaking has a tentative connection to the Nativity of Jesus, it has lost its solemn mode of quiet reflective waiting. And in truth, I don’t want to go back. As guilty as it makes me feel, I revel in our modern Christmas celebrations. 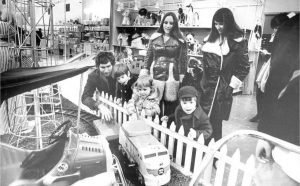 When I was a child, guilt about secular tradition never bothered me at all. It wasn’t until I became a mother myself, that the remorse set in and dogged my footsteps, taking little nibbles out of my joy, as I followed the traditions of my culture. Early in December, my husband Jay and I trekked through the snow-filled alleys of our Lincoln Park neighborhood in Chicago to the Fullerton “L” stop with all four children in tow. We rode the train to Randolph Avenue, getting off right in the basement of Marshall Field’s Department Store. We squeezed into a crowded elevator with other families and sped up to the sixth floor, a veritable children’s paradise, a square block of toys for sale.

The line to see Santa Claus usually stretched all the way back to the elevators themselves. My job, whether I cared to take it or not, was to hold a place in that slowly inching river of people. Jay had the equally challenging task of weaving with the children through the various display aisles as they concocted Christmas wish lists. Finally, it would be their turn to march up to “Santa” and sit on his (or one year her) lap and recite this list while a bored young photographer captured the less than memorable moment.

Next, we paraded up the escalator to the eighth floor so that we could admire the gigantic tree that stood in the center of the store’s premier restaurant, the Walnut Room, a carpeted, paneled space, reminiscent of the Victorian era.    The height of the tree always loomed far over our heads, and each year it had a different theme. By now almost exhausted and very hungry, we happily took our reserved place in the restaurant.  This experience tended to be a bit on the stressful side because fine dining and multiple children under the age of ten don’t make for a good mix. 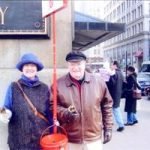 The day’s rituals were not, however, quite complete.  After lunch, we joined the throng outside Field’s, sometimes in absolutely frigid weather, to circle around the store and admire that year’s Christmas windows, which most often depicted a favorite children’s story. Always, the children loved this part of the day best.  Before descending to the subway station, we performed the only authentically Advent action of the day, we each dropped several coins in the bucket of the Salvation Army bell ringer. When the children were older, we all volunteered bell ringers ourselves. 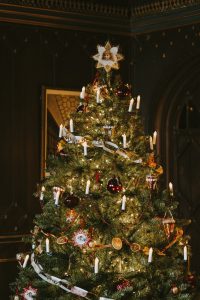 Most families have their specific ways of doing a Christmas tree. Jay had grown up with a flocked one.  To me that wasn’t quite authentic, but we weren’t die-hard enough to drive out to the country to cut down our own tree.  Rather we had our favorite close by our house, where all six of us milled around the lot, each choosing a different tree and then the negotiations began. Once we brought it home, of course, everyone agreed that we found the perfect tree.  Then the rest of us got out of the way while Jay with much under his breath cussing put up the lights.

There was one bad year. The kids had moved out of the house for college or residential living. I decided that we had decorated long enough with the ornaments that the children had made in preschool. I boxed these up and got rid of them. Then I proceeded to decorate the tree in shiny new ornaments. When the kids came home for Christmas, there was great wailing and gnashing of teeth. As far as they were concerned, I might as well have given away the family cat.

what does christmas truly mean?

If all this sounds to you like delightful, if exhausting celebration of annual traditions, your response is natural.  Why then did every step of the way drive virtual, yet painful, stones into my soul? There was always some part of me, that famous Catholic guilt, that chided me that I shouldn’t be giving into these materialistic rituals.  Why, I would ask myself, couldn’t I focus my children’s attention more explicitly on the religious meaning of the season. 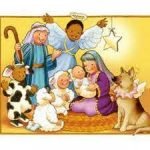 We did attend Mass each Sunday, but that was no more than we did the rest of the year. I always put out an Advent Wreath, but we didn’t always remember to light the candles. Somehow writing dozens of Christmas cards seemed more important. On Christmas Eve, when the children were in grade school, they took part in the enactment of the birth of Jesus, usually as an angel or shepherd.  None of them ever quite made it to Mary or Joseph.  But our family, like many other families, gathered at the Christmas Eve afternoon Mass because Christmas morning would be completely given over to discovering what “Santa” had left under the tree – always more than there “should” have been.

Finally, however, as I matured and the children grew, I let go of my guilt and brought a sense of humor to the season. Humor is not only a necessary ingredient of any successful committed partnership, it is a great asset for all of family life. Sure this season gets a little out of control at times, a lot over the top, but at the same time, it can be so much fun! When I can take a more relaxed approach to this “happiest time of the year,” it has a better chance of fulfilling its promise.

How do you balance the sacred and the secular aspect of the winter holidays?

“Once again, we come to the Holiday Season, a deeply religious time that each of us observes, in his own way, by going to the mall of his choice.” – Dave Barry