we’re out of here!

“We’re out of here” is most definitely the buzz phrase of the day right now.  After eighteen month or more of calling a trip to the backyard an excursion, literally thousands of Americans are taking to the road again. Among these excited travelers are a myriad of motorhome enthusiasts. Watching neighbors hitch up mobile abodes to their trucks and SUVs evokes poignant memories.

almost too good to be true

One of our best motor-home escapades began in February, 1979 when an airline’s TV offer jumped out at me between segments of whatever program engrossed my four kids under age eight.  It seemed so unbelievable that I had to call the airline immediately to be certain my ears weren’t deceiving me. The airline rep assured me, however, that I had heard correctly. They were offering roundtrip tickets from Chicago to San Francisco for $189 – and for each full-fare adult tickets, a child under twelve could fly free.

I took a deep breath, “And are babies under two free as usual.”

“Wow!” the agent said, “You really milked this offer for all it was worth.”

I hung up the phone with a shaking hand. I stared at the receiver for a full five minutes before I had the courage to pick it up again. Then, I called my husband Jay. “Hi,” I said, trying my best to sound very casual, “I just booked us on a flight to San Francisco. We leave in two weeks.”

“What? A flight to California!  What about the kids? I wouldn’t be comfortable leaving them with Bodil all that time. She’s a great au paire, but she’s only nineteen.”

“We’re not leaving them. They’re coming, and so is Bodil.”

“Yes, we can.  There was this great deal and I called right away to take advantage of it.”

Jay would have been well within his rights to tell me I was crazy at that point, but instead he simply said, “Cool. See you tonight.”

we really need the break!

Maybe Jay didn’t accuse me of being insane to make such a plan, but the truth was that at the moment I made the call I was over-the-wall stir crazy.  It had been an awful winter of frigid temperatures and snow storm after snow storm. Most days Bodil and I had been cooped up in the house from morning to tonight with three rambunctious little girls and one extremely adventurous toddler. My son Johnny spent his whole day turning the house into a jungle gym.  He climbed the fireplace mantles, the upright piano, the outside of staircases, and up on to kitchen counters to get into the cabinets.  By evening, Bodil and I barely had enough energy left to climb the stairs to our bedrooms.

We needed a break, and sunny California sounded like paradise. Then, the day before our flight Kristy, our eight-year-old, came down with a fever. Was our trip off? I explained our dilemma to her pediatrician.

“Well,” he intoned, “She can recover in California as easily as here.  I wouldn’t give up the family vacation for a cold.”

As a result, Kristy and I spent the first three days of our trip in a San Francisco hotel while the rest of the family explored the city. But it was worth it. We had salvaged the vacation and I loved hearing the other children’s excited tales of spotting jellyfish and otters at the Monterey Aquarium.  On day three Kristy was fully recovered. Time to start trekking.

We picked up our rented GMC motorhome and turned its nose south on the fabled Highway 101. Our first day, it rained so hard, we could barely see the way in front of us. Any moment, we thought, we’re going to pitch into the Pacific Ocean, but we pressed on. Just as night fell, we spotted a blinking neon arrow pointing to a campground. Jay swerved off the road and into an invisible driveway. Because we could barely see the other trailers and couldn’t discern any anyone assigning spots, we simply pulled into an empty slot.  The children were already sound asleep. We gratefully crawled into the couch bed. Bright sunshine woke us the next day. Gigantic redwoods surrounded us. They took our breath away.

The rest of the journey felt like a dream come true. Any scenic viewpoint with a parking spot big enough for our giant vehicle compelled us to stop.   We had no schedule. At every stop, the kids got out and played. When it was possible, we walked down to the beach and searched for shells and driftwood or took off our shoes and wades in the shallows. At some of the beaches, we were treated with the sight of seals resting on rocks so close we felt we could reach out and touch them.  Other stops offered plummeting waterfalls just a short hike from the parking lot. Every day the ocean breezes were warm and enticing. Taking each day as it came, we were continually surprised by the unfamiliar beauty of the ocean and the shore – so different in every way from our ordinary stomping ground – Lake Michigan.

one minute, one hour, one day at a time

It took us ten days to drive to San Diego. Theoretically, because it is 500 miles between these cities, we could have driven it in eight hours.  That gives you an idea of what a slow pace we had set for ourselves. 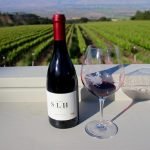 With four little kids along, touring wine country wasn’t a top priority, but we wanted Bodil to get the full flavor of California so we did stop at Buena Vista winery, a very quaint and charming place, which had been a winery since 1856, except during American Prohibition. There we enjoyed a picnic lunch while we drank in the view along with the wine. We didn’t know we were sipping a beverage that had been judged the top wine in the 1976 World Class Judgment of Paris. For us it was just part of a very pleasant family outing. 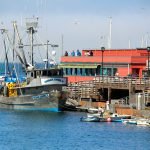 Although I was the only member of our troupe who enjoyed seafood, I did convince everyone to eat at a beautiful bay-side restaurant in Morro Bay.  There I treated myself to the oysters. Six weeks later when I became very ill with Hepatitis A, which the doctors traced to an outbreak in Morro Bay, I could only be very grateful that the rest of my family had shunned seafood and, thus, remained well. 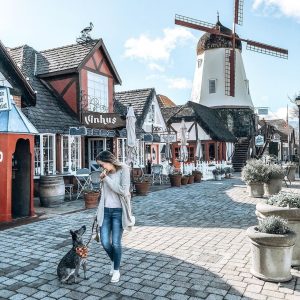 Just south of Morro, we veered inland to the Santa Inez Valley so that we could visit the town of Solvang, a town founded in 1911 by Danish immigrants that has clung to its culture and language. We had heard it was like visiting a little bit of Denmark right here in the USA. Stopping there was a must for us because Bodil, our au paire, was from Denmark. The town thrilled her – especially being able to hold a conversation in Danish with a total stranger!

Solvang’s authenticity made Disneyland, our next stop, all the more glaringly artificial.  At least that’s how it felt to me.  To my children it was magical realism come alive and they loved the entire day we spent there. The amusement park was plenty of La-La Land for me. The next day we head out of Los Angeles. 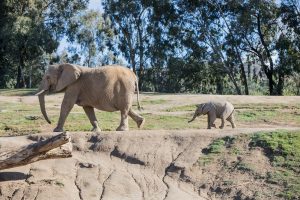 We got no argument from the little ones because we told them our next adventure would be an African safari.  This was not too far from the truth. Once we boarded our vehicle in the San Diego Wild Animal Park (now the San Diego Zoo Safari Park) and headed out into the 1600-acre reserve, we were about as close to being on safari as most people ever get. Once we saw how vast the exhibit was, we wished we had saved more days. We and our children could have spent many more hours in that awesome location.

But time was running out. Our return flight was the next morning. Over dinner that evening on the San Diego Pier, Bodil and I tried to talk Jay into the idea that he could fly back to Chicago while we stayed in California with the children for another week.  He wasn’t buying!

I promised myself I’d be back. But I never returned.  Life is short.  And the world is very big.  Even more distant shores lured me from home on future journeys.

3 Replies to “California, Here We Come!”