“I’m out of here,” resounds through our brain and often slips off our tongue when life appears to present us with nothing but disappointment, boredom, fatigue, malfunction, inconvenience, frustration, disenchantment, letdowns, and defeat.

The global pandemic, however, gives no “out of here” to go to. The only possible escape the common wisdom offers is “Stay Home.” Not easy advice to follow when it was cold, rainy and gloomy out, this phrase has reached anathema status with the advent of summer. Citizens have grouped themselves into two camps.  The ones who thumb their noses at the restriction and dive right into the nearest pool. The rest who sit at home watching the frolicking on TV  crying, “How dare they?”

An unfounded yearning for “better days” sweeps me into a chimera of nostalgia. Historic events of the 1960s spun society off its axis. Assassinations, protests, and riots left personal trauma and political disruption in their wake. And yet, for me, memories of that decade most often conjure visions of beaches.

Wherever I lived, Lake Michigan’s vast sand beaches and rolling surf were never far away. I grew up, went to college, and raised my own family within easy reach of her shores. From May through September, that confluence of sand and surf called me like a siren’s song whenever I yearned  to “get away from it all.”

Before the modern era, beaches embodied not respite but menace. From antiquity until the middle of the 18th century, the oceans and great lakes were a source of food. From their shores journeys began and ended. Not every voyager returned. Classic and medieval narratives abound with tales of the sea as a mysterious and dangerous realm.  The beach epitomized the edge of the unknown. Far from being places of retreat and recreation beaches roused dread and apprehension in human imagination. http://, https://www.smithsonianmag.com/history/inventing-beach-unnatural-history-natural-place-180959538/

The Industrial Revolution, the period from 1740 to 1860 transformed largely rural, agrarian societies in Europe and America into industrialized, urban ones. It transformed the seashore as well. As factories multiplied, cities and towns became increasingly louder, dirtier, and a clear threat to health. Some health professionals believed that fresh air, exercise and sea bathing worked as a curative counterpoint to the ravages of the urban environment. The wealthy began to flock to the beaches. Seaside resorts sprung up one after another.

The Romantic writers and artists at the turn of the 19th century added to the allure of the beach. They proclaimed that the seashore was “site of transformative experience.” The beach’s pristine emptiness and its lack of history made it the perfect escape from the drudgery of modern life. It existed 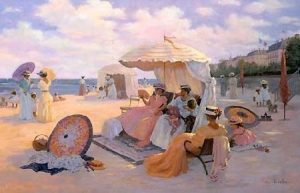 at the “’pleasure periphery,’ a place beyond the boundaries of quotidian life.”( John Gillis, The Human Shore: Seacoasts in History https://www.neh.gov/humanities/2013/mayjune/feature/the-blue-humanities)

In the United States in the 1960s a unique twist on the beach escape splashed upon our shores. Adolescents and young adults claimed the beach in increasing numbers. At the beach, kids escaped much more than the drudgery of everyday life. They also took flight from  a culture in turmoil and left behind an older generation that couldn’t be trusted. The Romantic poets had sung the wonders of seaside enlightenment in the 19th century. The 20th century beach revolution found expression in quite a different form. The “Beach Party Movie” was born and remains with us today as witness to escapism at its best.

The stories depicted in those films were set far from Lake Michigan, but the experiences of the characters mirrored to some extent the gatherings along the dune beaches in Indiana and Michigan so dear to my nostalgic heart.

Unlike Romantic poets and painters, Beach Party movie producers had no ambition to create great art. The movies’ characters were undeveloped. Their plots were wafer thin, almost cartoonish. In the early 21st century, they were often recalled as tokens of a more innocent past.  That past wasn’t innocent at all.  It is, however, the movie’s blatant indifference to the real issues of the 1960s that contributed most powerfully to their success. These movies chronicle a particularly vibrant moment in American popular culture, the explosion of rock ‘n roll and the rise of adolescence. They ignore everything else — true narratives of the “pleasure periphery.”

Plots revolve around dancing, music, surfing, drag racing, custom cars, and alcohol with no hint of social consciousness. Music dominates dialogue. The movies are filled both with plot-connected songs and unrelated performances by artists of the time. Teens and college kids move in a world in which they are the prime movers. Parents and other authority figures are “off stage” if mentioned at all. https://www.mentalfloss.com/article/29007/party-frankie-annette-7-official-beach-party-movies

With all their focus on frolic and fun, they necessarily leave out any reference to the problems plaguing the world outside the beach. Civil rights riots, political assassinations and the Vietnam War are disregarded. The big problem of every movie is a boy-meets-girl drama. The ending is always happy.

While I was in college, my escapes to the beach had a beach-party movie flavor to them.  St. Mary’s College students had strict curfews.  You could never just take off for the whole day. If you had left after lunch, you had to sign back in by five o’clock.  You could then sign out again for an evening. This policy, the nuns in the administration believed, would keep us from straying too far away.  It did not keep us from the beaches.  Fellows from Notre Dame regularly took turns doing the “beach run.” That meant around four in the afternoon, one or two of the guys would pack his car with as many girls as it could hold. The dangerously crowded vehicle then raced at breakneck speed from the Michigan dunes back to St. Mary’s College. The girls piled out, rushed into the dorm reception room, signed in and signed out again.  We then piled back in the car for another harrowing ride back to the beach.

In retrospect, it sounds crazy, but it was worth it. Those days truly reinvigorated me. For one day I could live on the edge, away from my grinding work in the dorm dining room and the draining demands of my studies. I soaked up the sun, emerged myself in the cool lake waters, and built childish sandcastles.  The guys provided the food and drink and the transistor radios for playing our favorite music. I had no reason to envy Annette Funicello. I learned an important Love Lesson – even the romance that lasts only one summer leaves you richer for the experience.

surviving the vagaries of time

The beach calls to me again as Covid-19 continues to claim more and more lives, disrupting more and more families and as American cities burn to protest police violence.  A day at the “pleasure periphery” might very well have some of its storied curative power.

But, for now, the beaches are closed. I’ll have to content myself with reading the book my sister Cheryl lent me, Same Beach, Next Year by Dorothea Benton. https://www.goodreads.com/book/show/31931767-same-beach-next-year

Are you yearning to get away right now? If you could do so, where would it be? I’d love to hear your stories of past escapes and present dreams.

Get notified when new blogs are published.

At the beach, life is different. Time doesn’t move hour to hour but mood to moment. We live by the currents, plan by the tides and follow the sun. Sandy Gingras