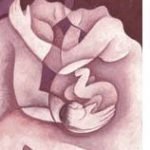 In the summer of 2018, I wrote a blog post which I titled, “You Won the Lottery, but You Didn’t Know It.” “The chance,” I wrote, “that you would not be is so far greater than the chance that you would have come into being as the unique person you are is almost incalculable. Literally millions of events in human history needed to occur just the way they did for the moment to arise when your father’s sperm successfully penetrated your mother’s egg. Once this miracle happened, the layers of environments surrounding the tiny zygote from the womb to the universe formed a coherent protective whole that assured you would be born.”

To dwell on this reality can be mind boggling. Just ask yourself, “What if my mom never met my dad?” or “What if my parents met, but never loved?”

That very thing almost happened to me.

dreams can be complicated

In 1935 twenty-year old Peggy Luger, the girl who would be my mother,

achieved her life-long dream. She graduated from nursing school. Unfortunately, she emerged from the cocoon of nursing school into a chaotic economic crisis. The Great Depression, the severe economic downturn that lasted from 1929 to 1939, affected the whole world.  In the United States, industrial production declined by 47 percent. Mass unemployment increased the rates of poverty and homelessness.

Yet, for Peggy, the immediate future glimmered with hope. Mercy Hospital in Pittsburgh, Pennsylvania, where she had trained, could offer her a position as a ward nurse. Another bright light in Peggy’s life, Frank O’Donnell, had proposed to her the evening of her graduation. She had worked over the past year with Frank, an intern at the hospital. A stocky, personable Irishman with a thick head of black hair and merry grey eyes, Frank had captured a lot of nurses’ hearts. Peggy liked him and she was flattered. She did not, however, feel she knew him well enough to accept his proposal.  Nursing students were not allowed to date. Now that she had graduated, she wanted to get to know him better outside the hospital setting. With supreme confidence that he knew the way to a girl’s heart, Frank agreed to wait for an answer.

Peggy struggled with another concern. She was considering leaving Pittsburgh because her parents had moved to Detroit, Michigan. Her father had been out of work for three long years, most of the time she had studied nursing. Her mom had kept food on the table by selling cleaning products door-to-door.  Neither of them would listen to Peggy’s pleas that she leave nursing school and help out.  She could help best, they insisted, by becoming a nurse. Last year her father finally found employment. But his new job as a draftsman for a construction company meant he had to move. Peggy’s young brother John had gone with them. Although she had aunts, uncles and cousins in Pittsburgh, her parent’s absence left a huge hole in her heart. She didn’t want to live so far away from them. 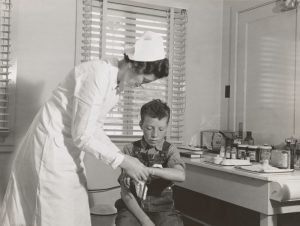 She decided to apply for a position at Providence Hospital in Detroit just to see what happened. Because her grades had been stellar and her recommendations were glowing, the Detroit hospital hired her immediately. A young woman of deep faith, she took this a sign from heaven and moved into her parents’ home on Cherrylawn Avenue on the city’s westside. She promised Frank that it wasn’t the end of their relationship. They could write, she said, and visit each other.  If by the time he graduated, if their love for one another remained steadfast, they could marry and she would move to Pittsburgh.

men he worked with easy-going and cooperative. One of the younger men, who was also named John, he took a particular shine to because that co-worker produced such meticulous work and offered to help others with snags.  Yet, he never pushed himself forward. “Luger,” as the guys at work called him like this tall, well-built, blonde kid’s humble attitude.  He decided to invite him home to meet his family.

“D.J.” as the other John was known, readily accepted.  Because Mrs. Luger (another Peggy) like to impress visitors, she set the table with fine linens and her best china. D.J., used to eating in his family’s farm kitchen, worried he’d use the wrong utensil for something, but more than the setting made him nervous. Luger’s daughter sat across the table from him. Her animated conversation about her patients at the hospital mesmerized him as did her soft, curly light brown hair and huge deep-blue eyes.

At work the next day, he asked Luger would it be all right if he asked Peggy to go out for some ice-cream the following Sunday.  The older man thought about the doctor back in Pittsburgh, but didn’t mention him. Instead, he gave D. J. their phone number. When she got the call, Peggy thought about Frank.  He wouldn’t be able to come to Detroit for three more weeks and lately his letters contained fewer and fewer expressions of affection.  It couldn’t hurt to just have ice-cream with another guy.

For the next six months, Peggy held her conscience at bay as she enjoyed the company and the attention of both young men.  D. J. had learned about Frank from her dad, but since she wore no engagement ring, he put faith in being “the bird in the hand.”  But, whenever Frank did come, he stayed in the family home and his dynamism and his plans for his future made it clear that he was the suitor that could offer Peggy the more secure and comfortable life.

With no real end to the Depression in sight, making a good financial choice couldn’t be just shoved aside.  Besides Peggy really liked Frank.  Mrs. Luger also like Frank and wanted her daughter to marry him, not just because he would be a doctor but because he was Catholic. D.J. had been brought up Presbyterian. Mrs. Luger didn’t hold by “mixed-marriages.”  They always caused trouble she said.  Love wasn’t enough to see a couple through deep religious differences.

Her mother’s words penetrated her soul, but weren’t proof against the growing chemistry she felt whenever she spent time with D.J. When he laced his strong fingers through hers as the walked in the park, as he traced a finger down her cheek, and when she couldn’t help lay her head on his shoulders at the movies, she felt an electric fissure of pleasure.  When Frank kissed her good-bye before leaving for Pittsburgh every other week, she sensed a solid warmth and security, but there was no zing to it.

She could imagine life without Frank. She tried to picture what it would be like if D.J. dropped out of her life.  No, that wasn’t a possibility she could entertain.

Thus, began the chain of events that led to my conception and that of my siblings – and consequently, any potential children of Peggy Luger and Frank O’Connell were relegated to oblivion.

“if you love two people at the same time, choose the second. Because if you really loved the first one, you wouldn’t have fallen for the second.”

Did you ever have to choose between two loves?  How did you make it work?

What Every Woman Wants

What every woman wants