no singing no dancing no toasts

“What do you miss the most?” a friend recently asked. Living through the CoVid-19 pandemic robs us of so much normalcy that it can be hard to pinpoint just what our hearts yearn for most. Yet, it took me only a few moments to answer, “Celebration.”

Weddings, baptisms, bar and bah mitzvahs, and even funerals have been thrust aside as impossible under present conditions. It’s heartrending to witness people we care about either put off a major transition in their life for which they had long prepared. Equally discouraging is to become married, to confirm one’s place in a community of faith, or to say final good-byes to a friend or family member, but do so alone or with as few others as possible quietly and efficiently before moving back into the rhythm of quarantine living. No singing. No dancing. No toasts.

This particular spring the missed celebration that is hitting our family the hardest is that my grandson Bryce will not “officially” graduate from high school.  He’ll simply move on. Hopefully, he’ll begin college next year. No one 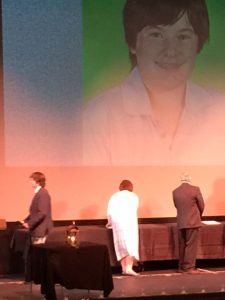 can know for sure this week what September will bring.  But he will do so without the celebratory hoopla that usually accompanies graduations – the caps and gowns, the marches, the parties, the gifts, the hi gh spirits. He’s not alone. You can read about the other 3.6 million here:

Bryce himself is fairly complacent, but the elders of his family really wanted to celebrate this major transition with him. Perhaps, we yearned for festivity as way to relive the memories of our own graduations and the changes they brought.

I’ve graduated more than the usual amount of times, piling up diplomas and degrees like a stack of tarot cards I used to try to tell my future.

The idea of graduating kindergarten brings on a sense of the ridiculous, but for me the change was profound, making as it did, a life path that would forever follow twists and turns rather than the straight, narrow way. When I left kindergarten, I transitioned from the public to the Catholic school system in Detroit, Michigan, an abrupt change of direction and not a little disorientating for one so young. My kindergarten teacher, Mrs. Moody had been pretty, sweet and young – much like a favorite aunt. The nun who ruled my first-grade classroom believed that no learning could happen without strict discipline.

I buckled under. Any natural free spirit squelched. All my energies directed into being a “good student,” a designation that never left me. I clung to that as a core sense of identity, my one quality that remained true and firm even when other endeavors failed. The problem with this identification is I couldn’t be a student forever.  Graduations were inevitable.

After attending grade school for eight solid years, I graduated from both eighth grade in 1956 and ninth grade in 1957, because a family move once again propelled out of one school system into another. My father took a big leap into a management level position with another company in another state the week after my eighth-grade graduation. In our new home town, Muncie, Indiana, elementary school concluded with sixth grade. The next three years students attended junior high and then graduated at the end of ninth grade. In September, 1956, instead of enrolling in my first year of high school as I would have in Detroit, I entered a final year of junior high.

Once again a member of a “graduating” class, this time of St. Lawrence Catholic School, I thoroughly enjoyed all its attendant perks plus one important status I had not had at St. Brigid’s.  Because the thirty ninth-grade students had been together since kindergarten, the arrival of a “new girl” triggered a wave of excited interest. Luckily it played out well for me. By graduation, I celebrated as joyously as if I had actually journeyed with these same kids for the last decade.

Just three years later, we were all graduating once again.  This time with a diploma from Muncie Central High School. For most of my classmates, it would be their last graduation. Only ten percent of my high school graduating class went to college.  For the others it was time to take on the adult responsibility of a full-time job. Many celebrated their weddings shortly after graduation and were parents within a year. Among the lucky few who had the opportunity to continue my education, I moved to the campus of St. Mary’s College in South Bend at the end of the summer. Over the summer, my family moved as well. Back to Detroit and shortly thereafter to St. Paul, Minnesota.

I expected to spend four years earning a bachelor’s degree. It took seven. I accumulated course credits not only at St. Mary’s but also at De Paul, Roosevelt, and Loyola Universities as well as at the University of Minnesota. Yet, I did finally receive a degree from St. Mary’s in the rather nebulous field of English Writing, the rather vague designation under which my hodgepodge of course work was gathered. I had long since moved away from St. Mary’s, but, because then as now I loved celebrations of any kind, even ones that acknowledged somewhat dubious achievements, I returned to campus for graduation in August, 1967. I partied with my family after certain that I had finally finished graduating.

deja vu, all over again

Thirteen years later, however, the irrepressible student at my core, found a space for herself in my consciousness once again. By that time in 1980, the world and I had both experienced cataclysmic changes. The woman on the cusp of middle age barely resembled the girl of twenty-two. I had compressed a lifetime into those thirteen years. As I became a student once more, that experience informed all that I heard in the classroom, read in the library, and wrote at my computer.  One thing, however, had not changed. I took my time achieving my goal. Twelve years passed and I had two master’s degrees before I accepted my Ph.D. in Theology from my mentor Martin Marty at the University of Chicago.  Now, beyond a doubt I had finished graduating. But, I did so much more aware than I had ever been that I had hardly begun to learn.

“The real ceremony begins where the formal one ends, when we take up a new way, our minds and hearts filled with the vision of earth that holds us within it, in compassionate relationship to and with our world.”
― Linda Hogan

As a child, I wasn’t happy with my transfer from public school to Catholic school, but there’s some fairly decent argues as to why that can still be a good decision for parents to make. ttps://www.nytimes.com/1996/09/22/weekinreview/parochial-school-mystique.html

Catholic schools – good or bad?  What do you think?