Any time but this one

Life can be a grind. That has always been the case, but it’s even more true as the entire world lives through a pandemic. At a time like this, simply fleeing the boundaries of our own place may not feel like enough of a respite. Why not, we might ask ourselves, abscond to another time? 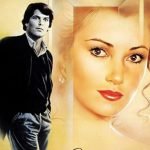 The protagonists of such books as Bid Time Return by Richard Matheson(https://www.abebooks.com/BID-TIME-RETURN/30207059856/bd?cm_ ),which may ring more bells for you as the film, Somewhere in Time, with Christopher Reeve and Jane Seymour, and The Lake House by David Auburn ( Remember Keanna Reeves and Sandra Bullock?) actually break the time barrier.

This is what my family and I did for fifteen summers. Well, we didn’t leave the twentieth century.  We vacationed on Mackinac Island. At the point where the two peninsula that make up the state of Michigan meet, sits a 4.5-acre island, which rises steeply on all sides to a 900-foot

pinnacle. It is also entirely car-free, and has been since 1898 — only horses and bicycles are allowed, giving the place a laid-back vibe. And for me, living without gas-engine traffic of any kind, turned my stay on Mackinac into a trip to another time. It slowed everything down. https://www.mymichiganbeach.com/mackinac

The island can only be reached by boat. For my family that meant taking the ferry that ran almost continuously during the days and evenings. A valet drove our minivan to storage while we wheeled our bikes and dragged our suitcases aboard. Also, loaded for us were the boxes of groceries we had purchased in Mackinac City. Island groceries were expensive and sparse. Settled aboard, I climbed to the third deck and stood at the bow. As the boat sped across the strait the cool north winds played havoc with my hair and my spirits lifted. I squinted my eyes to catch a minuscule glimpse of Gallery House, the cottage that would be our home for the next three weeks. And then the ferry rounded the island and the harbor jam-packed with sailboats appeared. Behind them white-frame buildings, set in higher and higher rows, formed a gleaming welcome on three sides.

From the moment I wheeled my bike down the ramp, I was forced to accept that the blueprint for how I usually planned my days could not structure my next three weeks.  Rather, I literally lived the pace of another time, a time before my grandmothers had been born.

Just to start, the ‘cottage’ (on Mackinac Island even very grand mansions are referred to as “cottages.”) where we would be living was near the top of the island and a couple miles beyond the harbor town. Getting our suitcases and groceries to the house meant hiring a horse drawn wagon. I stood guard over our belongings and our kids while Jay headed to the street to hail a wagon driver.  If we were lucky, it didn’t take too long.  But it always seemed to take long enough for the children to spot the ice-cream vendor. Mackinac like many other American tourist destination is “famous” for its fudge, but it’s extremely creamy ice-cream is every bit as delicious.

The first year we arrived we had had no idea what to expect in terms of our accommodations.  One of Jay’s business associates, Len’s wife worked with a woman who had recently inherited her uncle’s place on the island. She rented it out for most of the summer. Len and his wife Sue couldn’t afford the rent on their own and asked if we’d consider sharing. We decided to give it a chance.

From the directions, I originally thought we’d be staying close to the town. Sue said to let the lorry driver know we were staying at the Gallery House in the Annex.  He would know where that was. I pictured a house somehow attached to one of the many art galleries in town.  But once we were all seated on the benches at the front of the wagon, our horses clip-clopped right past all the Front Street buildings and turned to go up the hill.  They trotted past a beautiful golf course. As we arrived at the entrance to the Grand Hotel with its 660-foot porch, a guard stopped us.  The driver explained we were on our way to the Gallery House and the guard waved us through.  Jay and I looked at one another and shrugged our shoulders.  This was interesting. 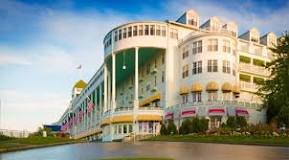 The kids loved the hotel and spotted its swimming pool.  I disappointed them. “No, we’re not staying here.” I didn’t know at that point that passes to the hotel pool came with our cottage. Just past the porch of the hotel, the road rose steeply. To the left a sheer drop to Lake Huron far below and on the left stately gleaming white Victorian mansions with wide-sweeping verandas sat on spacious lawns – the cottages of the West Bluff, summer homes of wealthy Detroit and Chicago families. When we turned away from the bluff, we could see that each cottage had not a garage, but a stable and the horsey smell that had assaulted our nostrils the minute we stepped off the ferry became stronger yet. Another left turn took us down a gravel road between more lovely homes, though not as grand as those on the West Bluff. Many of these were half-hidden by tall oaks. Then the driver swung the wagon to the right once more and stopped.

In the middle of an enormous expanse of deep green grass stood a yellow clapboard house. Its proportions were more modest than those of most of the abodes we had gone by, but its lines were charming. A screened-in porch, scattered with wicker furniture, ran around three sides of the house. Rising narrowly from the porch roof, four deep eaves defined the second story. “Here you are,” the driver said. “The Gallery 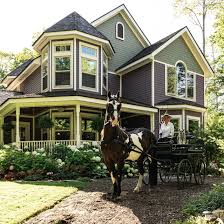 The children scrambled down from the wagon and ran across the lawn. As Jay, the driver and I unloaded box after suitcase after bag onto the ground, I could hear the sound of the children’s footsteps pounding on wooden floor boards. Shouts of, “This one’s mine,” alert me to bedroom claims. I felt like my whole body was smiling. I stopped unloading and gave Jay a hug. “Looks like we’re home,” I said.

Our days fell into a restorative rhythm. Family members rose anytime they wished in the mornings and fetched their own breakfast from the large pantry just off the kitchen. Always a lark, I was the first one out of bed, settled happily on the front porch with a book and a cup of coffee at least an hour before the stairs creaked with the sounds of anyone else’s footsteps. Jay alternated between sleeping through breakfast and rising quite early to meet friends at the Grand Hotel golf course for an early game. Having discovered the passes to the swimming pool, the kids most often biked down to the hotel in the morning. Sometimes, however, they biked into town to the stables to rent horses to ride the back roads of the island. I spread my time out over biking, shopping and exploring the museums.

By ordinance, no Mackinac restaurants or shops could be franchises of chains, so eating out was a pleasurable adventure.  Whether we ate lunch or dinner at the cottage or at one of the dozens of “eating places,” as Kristy had called restaurants since toddler days, depended on whether the fleet was in or not.

The three weeks, which we spent on Mackinac each summer, coincided

with the “Mac”. “The Chicago Yacht Club Race to Mackinac … is one of the world’s largest annual offshore races, drawing top-notch sailing talent from around America and the world. Known as ‘The Mac’ to everyone in the region, the 333-statute mile (289 nautical mile) the race typically starts each July just off Chicago’s Navy Pier and finishes at Mackinac Island, Michigan.” (https://www.cycracetomackinac.com/news/article/chicago-yacht-club-announces-cancellation-of-2020-race-to-mackinac) {The race was called off this year for the first time in one hundred years.  The last time it was called off was 1920 due to pressures of World War I.)

It was a glorious time to be on the island. The last of the race, we gathered in town in front of the yacht club tent, where the race was

being monitored. Watching the boats come flying in for the final stretch of the race was heart-thumping. Almost always, the yachts unfurled

their spinnakers, the large three-cornered sail, set forward of the mainsail, bulging and full, running before the wind as they passed under the Mackinac Bridge. The harbor filled with boat after boat. Hundreds of weary, but elated, sailors filled the streets and taverns of the town. Walking down Front Street was a stroll through the dioramas of Disneyland’s Pirates of the Caribbean.

Most decisively it was a time to eat “at home.” We saved our dinners out for the quieter days when the sailors took their boats to other harbors.

When our three weeks on the island came to an end, we packed reluctantly. Thoroughly accustomed to “island time,” we envied the wealthy families for whom this was a summer-long experience. We never adjusted easily to being home again.  The sounds and pace of the twentieth century are jarring when encountered overnight. We did, of course, acclimate to automobile traffic, alarm clocks, and work timetables. We could fine-tune our sensibilities by comforting ourselves with the promise that next summer would come.  And next summer would bring a return to another time.

If you could travel to any time you chose, when would it be?

“People assume that time is a strict progression of cause to effect, but *actually* from a non-linear, non-subjective viewpoint – it’s more like a big ball of wibbly wobbly… time-y wimey… stuff.”
― Steven Moffat

2 Replies to “Journey to Another Time”