Laughter: the secret of staying married

Pretty often, Jay and I field the question, “How have you managed to stay happily married for over fifty years?” Usually we laugh because we know the questioner is looking for some deep wisdom and not expecting the response that we like to give, “grape stomping.” But we love to tell stories about driving our four kids, all under age ten to Michigan. Once there, we tossed them into a half barrel of ripe fruit and encouraged them to “smash those grapes.”

2020 has been a really rough year for just about every person in the world. That’s why it vividly brings back my memories of the 1970s. In that decade our

children were born, grew into sturdy toddlers, and started elementary school. At the same time grand-scale tumultuous events tumbled over each other with such rapidity that we wondered if we would survive the chaos. Everything we believed in as children was called into question – our nation’s standing in the world and its ideals, our religion and its practices, our society and its standards, our culture and its aesthetic. To keep one’s balance on such shaky ground demanded not only a commitment to love, but also an ability to embrace good times when they offered themselves. Grape stomping was just such an opportunity.

We found our chance to jump into this activity in southern Michigan. When most people thought of American wine in those days, they thought “California.” It’s easy to associate the growing of grapes and the production of their juice with milder climates. Today, Oregon has as wide a reputation for fine wine as her southern sister. But fifty years ago, Michigan was the third largest producer of wine in the United States.

through a nineteen-inch snowfall to get to their new front door. The next fall the young vintners bought two tons of Delaware grapes from another local vineyard. They produced two and a half tons from the fourteen acres of young vines they had planted the year before. Now it was time to make some wine.

That’s where our family, along with dozens of other Olson and Banholzer friends, came into the picture. The two men decided to crush their first grapes the old-fashioned way, finding it easier to stomp the grapes than hand crank the grape presser. Grapes were placed in sawed-in-half wine barrels. Off came our shoes and socks and into the barrels we went. That first year we foot-stomped 400 gallons of juice for wine. Although the first bottle of wine would not be sold for two more years. 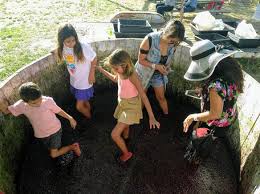 I’m not sure whether it was more fun to feel the grapes squish between our toes as the juice splashed up to our knees or to watch the delight on our children faces as they stomped merrily around in the barrels, turning shades of purple and dying their clothes with grape juice.  This was adults gone completely berserk. They were being encouraged to get “dirty,” and their parents were joining in. Adding to the merriment, the vintners hired local musicians to play upbeat jazz and country music while we stomped.  Grape crushing turned into dancing and many of us continued stomping even out of the barrels.

When the last grape had been squished into oblivion, we ushered the children into the barn, where big tubs of warm water waited.

Getting rid of the purple stains had to wait until we got home.  Instead, we rubbed the kids with old towels and got them into warm clothes. Then we joined the small crowd who’d gathered to relax after the day’s labors – grape juice for kids and wine for adults. Then to say thank you, Ellen Olson treated us to a gourmet picnic spread.

A number of the people at the stomp had also helped with the work of planting and harvesting the vineyard. Olson would later say that he believed the labor-intensive work and the camaraderie it entailed helped many of his friends adjust to life during and after the Vietnam war – both those who had served and those who had struggled at home. https://silo.tips/download/michigan-wine-industry-research-state-of-michigan-department-of-agriculture-7

Although not as deeply involved with the vineyard as those friends, Jay and I shared some of the same benefits. 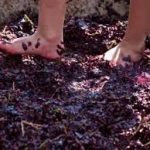 Jay’s work as an environmental attorney at a time when the national and international standards for the protection of the environment had only begun to be developed meant long hours, difficult briefs, and tense negotiations. It didn’t leave him with much energy or time to spend with family. During those carefree days in the vineyards, he could completely leave his worries back in Chicago. Stomping to music beats banging your fist on the table while demanding that the northern Indiana steel companies stop belching black acrid smoke into the air over the dunes.

What I loved most was letting go of civilized standards.  I never realized until it happened to me that you give birth to stone-age humans and have only five years to transform them into citizens of the twentieth century. Those times when I could not only allow, but actually encourage my children, to be carefree and silly were few and far between.  The need to break the confines of civilized behavior made Halloween my children’s favorite holiday. Grape stomping fit into that same set of rituals, harking back to times before Victorian rigidity and contemporary rationality.

Laughter ruled the day. Everything was funny. Nothing felt forbidden. We would all be laughing in the car on the way back as we recalled various moments during the day. Of all the ties that bind Jay and me laughing together is one of the best. The silly laughter we shared during the grape stomping drew us together then. We laugh again when we remember those days and the ties become even stronger. https://julewardwrites.com/committed-relationships/marriage/new-year-new-beginnings/

If this sounded like fun to you, you can still get in on the merriment. https://www.harborcountry-news.com/features/a-decade-of-grape-stomping-at-baroda-founders/article_5a408380-d4ba-11e9-bb5d-eb685c3388da.html