Would there be a 2020 Major League Baseball season? For weeks, then months, the answer evaded the professionals and the pundits. Finally, after a long stretch of squabbling and doubts, the season was announced. It would begin the last week in late July. Yahoo!

But when the games got going, so did a lot of disappointments.  We are, after all, in the middle of a pandemic!

Jay and I have survived another kind of baseball drought. Like every couplet we came together with completely different DNAs. Biologically those strands merge to shape four very unique children. The merger of our psychological and cultural DNAs fashioned the “us” out of “you and me.” Because I left home at eighteen to attend college and never returned, but Jay returned to Chicago after he graduated from Notre Dame, his hometown DNA somewhat dominated the identity of our committed relationship.

sports on the periphery

Growing up in Detroit, Michigan, made me a nominal Tigers fan, but

I didn’t come from a sports-orientated family. My dad, his brother and my grandfather were avid boaters and fishermen. In cold weather, they buried themselves in basement workshops building or repairing furniture. My grandfather also crafted toys for my siblings, cousins and me. Any knowledge I had of hometown sports teams came from reading the newspaper, a favorite pastime I developed in the third grade. But there was no one in my family to discuss the wins and losses of the Tigers or Lions with. So, my interest waned.

focus on the game

Jay experienced a whole different milieu growing up. In his family, people worked to make a living, but they lived for sports. His 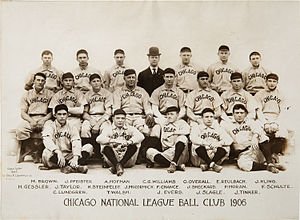 grandfather had been a teenager in the glory days of 1907 and 1908 when the Chicago Cubs had won back-to-back World Series. His devotion to them lasted a lifetime although he never saw them win another championship.

When Jay was young, his whole extended family gathered at their grandparents’ home for Sunday dinner. He joined the men in the living room, first to listen to the games on the radio and later to watch them on TV. He’d sit right beside his grandfather, who filled him in on the background of the players and when the Cubs were losing, told him stories of better days. This loyalty pitted Jay against his father, a Chicago southsider and an avid White Sox fan, but it bonded them in a friendly rivalry and joint love of the game.

Thus, as Jay and I melded our lives into one in the late 1960s, one strong component of our new cultural DNA was a stalwart Cub

allegiance. Being a Chicago Cub fan, I soon discovered is a very odd phenomenon. And never odder than when I first started to follow them. My husband, I soon learned, avidly followed a club that had a terrible record, but fact that the team was likely to lose any given game one attended took nothing away from the terrific good time to be had at the ballpark. https://chicagobaseballmuseum.org/chicago-baseball-history-news/baseball-under-glass-blog/1969-cubs-bleacher-bum-still-enjoyed-world-series-away-wrigley-field/

cracker jacks and all that

“Take me out to the ball game” meant something so completely different then than it does now. For us, there wasn’t even a question of paying for parking. We could catch the “L” just three blocks from our Rogers Park apartment and get off at Wrigley Field’s Addison

Avenue stop We were “bleacher bums.” Tickets were $1 a seat. Hotdogs were 30 cents and a beer was 40 cents. We could attend a baseball game for less than it cost us to go to the movies. Even on our newly-married, still-in-school, budget, a Cubs game was affordable entertainment. https://www.bleedcubbieblue.com/2013/7/6/4493756/50th-anniversary-first-cubs-game

Sitting in the bleachers wasn’t just good for us because it was cheap. When I sat in those seats, I learned a lot about pitching, defense and outfield play because the whole game was right in front of me, and Jay conveyed to me the lessons his grandfather

had taught him. Those were some of our greatest times together. While I learned about baseball and came to love the game, I came to know and understand my husband better, to see the world through his eyes, to walk in his shoes.

Did we want the Cubs to win? Of course, we did. We cheered like crazy for every hit. We moaned and groaned loudly when the opponent scored. A Cub home run had us dancing in the aisles. We never left a game before it was over no matter how far behind the Cubs fell.  We had seen the team come from behind too often to ever give up.

Were we brokenhearted when they didn’t? No. We had just had such a delightful afternoon (and they were all afternoons in those

days of no lights at Wrigley Field) that losing didn’t diminish our spirits. For the space of a few hours, the worries and stresses of work and school, of passing tests and paying bills, of just plain making the grade in the adult world fell off our shoulders.  In Wrigley Field we were kids again. Life was, for a short time, all about having fun. Even losing couldn’t spoil that.

After the game, very often we strolled east to the lake and north home, full of good cheer whether the Cubs had won or not.  We didn’t expect that the team would go into the play offs, which was just as well. We were back in school by September with less time on our hands. . . . And there was always next year.

“next year” came after all

One of their best years, 1969, we weren’t able to go to any games because our first daughter Kristy was an infant.  But we joined

neighbors on lawn chairs outside our apartment complex to play the games on the radio, barbeque hotdogs, drink beer and pretend we were at the park.

The closest we came to seeing the Cubs win it all was in the film, “Back to the Future,” which we thought was an impossible dream in 1989, the year the film came out. And when the proverbial “next year” finally did come in 2016, Jay and I no longer lived in Chicago! We had to watch the joyous crowds surrounding Wrigley Field on our TV in Portland, Oregon.  Talk about bitter sweet!

Life will always throw you curves, just keep fouling them off . .  .the right pitch will come, but when it does, be prepared to run the bases.  Rick Maksian

2 Replies to “Love in the Time of Baseball Drought”