sharing dna, but little else

In my last blog post, I pondered the question, how my children people sharing so much DNA and raised by the same parents in the same household could be so different from one another? I particularly tackled the question of why my oldest daughter, Kristy, should be so innately friendly, truly a child who never met a stranger while her younger by 18 months sister, Carrie, clung tenaciously to me whenever an even slightly unfamiliar person approached her.

messy or neat: is one better?

antithetic attitudes that Carrie and our youngest daughter Betsy took toward orderliness. Carrie’s sense of order was inborn, almost God-given. By the time she was six weeks old, she had developed a completely set pattern of eating and sleeping. By her second birthday, she had already established a place in her small room for all her clothes, toys, and books. Everything went back in place after she used it.

Betsy, however, was an infant who though sleep was for wimps. She seemed to be afraid that if she slept for more than twenty minutes at a time, she’d miss out on the something good. From an early age, she took the same attitude toward tidying up. As far as she could tell, it was a waste of time better spent having fun. No pleading, no rewards could entice her to put a toy back on a shelf or a dirty shirt in a hamper. She didn’t say she wouldn’t do it – she “just forgot.” At one point, in desperation, I placed a sign on her bedroom door that read, “If you have a heart condition, enter at your own risk.”

When I researched the topic of sibling differences for last week’s blog, I discovered that scientist have found that we are born with tendencies toward being an extravert or an introvert.  Could the same be true about our sense of order? Are some people just born with personalities that prefer order while others thrive on chaos?

It has been established that people react differently to order versus clutter, “For some people, a tidy room can be soothing. An orderly retreat in an often-disorderly world. For others, such rooms can be sterile, bland, and uninspiring. Some people feel anxious in a cluttered room while others feel their most creative amid the squalor.”

Some psychologists consider that the tendency to be orderly or messy follow personality types. They tend to see Type A personalities as more orderly and Type B people as messy creatives.  But while Betsy slips fairly easily into Type B categories such as enthusiastic, persuasive, friendly fun-lover, Carrie more closely resembles the Type C personality, creative, detailed, organized, thoughtful and concerned about quality control.

And we are left asking are personality types themselves inherited or created by a child’s environment? The straightforward answer to that question, according to most research, is the personality traits of humans and animals are determined in large part by their genetic makeup. But genetics does not determine everything.

what can parents do?

Such conclusions leave me pondering.  Could I have possibly been able to influence Betsy to keep her room more orderly and be more helpful about household chores in general? I’m not at all certain about that.

One intriguing discovery that came out of these studies is that while environment, for the most part, plays a greater part than genetics in determining adult behavior, the effects of parents and other caretakers plays a very small role in determining our ultimate adult personality.

There are simply too many other factors in every child’s life that also influence his/her development.  And these other influencers grow in number and importance at every developmental step.  One of the first influencers is other siblings.  And I’m not courageous enough to attempt to unravel what affect Carrie’s love of order may have had on Betsy’s carefree attitude toward clutter.

By the time Betsy was ready for nursery school at age three and a half, I had pretty much learned to let her live in the chaos she found fit her creative spirit. In filling out her application for the Lincoln Park Cooperative Nursery School, I indicated that the teachers would have some problems with Betsy when it came to picking up after herself and following other rigid rules of order.  Shortly after the school received the application, the head teacher and the teacher for Betsy’s potential class called me in to speak with them.  Kristy and Carrie had both attended the school.  So, the staff was familiar with our family. 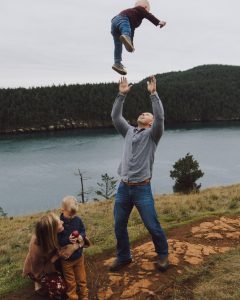 They were concerned they told me about my negative attitude toward my third child.  The applications for my first two daughters had included no warnings, just glowing descriptions, but here was this gloomy assessment of Betsy.  They wondered what they problem was.  I had to reassured them that I loved my outgoing, sunny, exuberant baby girl every bit as much as I loved her sisters.  Honesty had compelled to include what might prove a challenge for them.  They seemed only half convinced of my sincerity.

Six weeks into the school year, however, they called me back into school to apologize. Betsy was, they conceded, delightful in all the ways I said she would be, but every school day when the “clean-up” song began, she disappeared.  She had discovered a wonderful, cozy hideaway on some soft beanbag chairs in a closet. These became her instinctive retreat the minute the song’s first note rang out.

No surprise there. As individuals, as a couple, and as parents, Jay and I tended to take things as they came to us.  Close friends of ours and fellow travelers in the parenthood adventure, the Vander Voorts had a family motto, “We’ll know more later.”  We like their motto so much, we adopted, but with a caveat, “We’ll know more later – maybe.” We wanted Betsy and all our children to develop into unique individuals. Letting character flaws as well as strengths emerge as they grew allowed them the best chance to be exactly who they were meant to be. Over the course of their lives, each of them amazed us beyond our wildest expectations.

(Sibling differences is theme I also explore in the children’s story, “Becky Birch,” which I will be posting this week on the Stories That Chose Me segment of this website. Be sure to check it out.)