Leon Trotsky is best known as vital leading figure in the Red victory in the Russian Civil War.  One would think that the outcome of that tumultuous time would strike him as the most unforeseen event of his lifetime. Yet, he actually claimed, “Old age is the most unexpected of all things that happen to a man.”

He was so right. We dream so many dreams when we are young, even dreams

of a grand revolution, but we never dream of becoming old. So, we are flabbergasted when we realize it has befallen us. In some ways, of course, it is a blessing in disguise. We cannot help but acknowledge that the only real alternative is considerably less appealing.

love beyond the grave

Being an elder is on my mind this week, both because yesterday was my father’s birthday and the anniversary of his death and because I’ve just finished reading Elizabeth Berg’s The Story of Arthur Truluv. Berg’s protagonist Arthur, an endearing widower, reminded me strongly of my dad. Both men recalled wives, who were challenging companions, with great fondness and kindness, a kindness that extended beyond death. Arthur goes daily to have lunch at his wife’s grave. My father gave up his lake cabin because it was too lonely without my mother. Both men invariably spoke well of their departed spouse.

Death did not sever the bond of marriage between Arthur and his wife Nola anymore than it did that between my parents, John and Peg. The relationship pattern that had kept their commitment strong through thick and thin continued. Their partner’s physical presence perished, but their spirit remained within the heart of the husbands they left behind.

And those husbands continued to treat the wife of their memories with tender kindness. They didn’t do this by sanctifying them.  They could still admit to the flaws and idiosyncrasies of the women with whom they had spent more than sixty years. But they never spoke of them with disrespect or contempt.

As I read The Story of Arthur Trulove, memories of other elder couples I’ve loved flooded my heart and soul. I could see again my grandfather sneaking me sips of his rich, milky coffee and my grandmother scolding him, “Now you know, Ted, that baby doesn’t need coffee.” 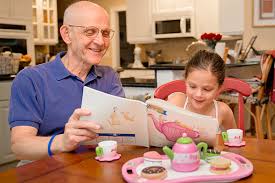 her cheeks.” My grandmother would sigh and I could feel the electricity that sparkled in the smile they exchanged.

When Nola in the book is in her last illness, I remembered my Uncle Jim and his wife Betty. Theirs was a relationship I witnessed from beginning to end because when I was ten, my grandmother set me up to chaperone my young uncle when he borrowed the family car for a ride with his girlfriend. I thought Betty with her dark page boy and luminous brown eyes was as glamorous as a movie star.  They probably could have dumped me at a soda fountain for all I cared.  But they didn’t.

Sixty years later, my uncle suffered a debilitating stroke. My aunt, devastated that he was too heavy for her to care for, allowed him to move to an excellent assisted living center. I was sometimes lucky enough to accompany her on her daily visits to the facility. Every afternoon she joined him for lunch and a one-sided conversation until he fell asleep.

When he died, she buried his ashes in their church garden so that he would be

right there where she could visit every Sunday. Uncle Jimmy loved that church. It was such a great kindness on her part to bring him to rest where his favorite hymns would waft over him every week.

Newlywed couples receive the admonition, “Be kind to each other; treat each other with civility even in discord.” If as an elder couple, Jay and I live by that same maxim, we can hope that although we might not have anticipated being old, we did expect to be well-loved and in that we were not disappointed.

Have you read any books that sparked memories for you lately?

But how do you decide what to do once you’ve got it set?  Check out this short exercise!