When impact of the present pandemic hit home, the “new normal” became the big new buzz phrase.  Way back in February, many anticipated a couple of weeks of “shelter at home” and then back to “normal.” But here it is summer. And normal still eludes us.

If we are honest, we admit that even when social distancing loosens up and most businesses are no longer shuttered, our day-to-day reality will be significantly altered.  “Normal” will evade definition. We began 2020 in a place to which we can never return. Hence – the “New Normal.”

The cataclysmic sweep of CoVid-19 across our entire world has caused the idea of normal to appear to be an illusion of sorts. It may be that this is the year in which the word “normal” disappears from our vocabulary.

This is my second go round with a norm-shattering communal hurricane. It comes almost exactly fifty years after the first one, the year 1969.

My personal life altered overnight when, without medical rhyme or reason, five years of infertility ended. I conceived a child and gave birth to a baby girl. But my return to a traditional trajectory of womanhood played out against a backdrop of political and cultural turmoil that packed into a single year enough counter-cultural phenomena to fill a century.

The world in which my daughter celebrated her first birthday was not the world into which she had been born. The earthquake that was 1969 produced a “new normal” that meant she and I grew up in the same geographic location, but in alien lands.

Because of my youth, I welcomed the changes with open arms. The brave new world excited me. Throwing off the shackles of centuries of prejudice liberated my soul. I rejoiced for my children. At the same time, I celebrated at a distance. Being the mother of an infant daughter meant my immediate struggles were of a more mundane nature.

every kind of revolution

While David Reuben’s Everything You Always Wanted to Know about Sex, But Were Afraid to Ask shocked many, it became an instant best seller, which made it possible for the next generation to have a healthier and more realistic attitude toward sexual intimacy. For Jay and I, it provided a guide to a subject forbidden to Catholics – birth control. It took family planning out of the murky shadows into the clear light of reason. We could not know at the time that in making “more rational” decisions about when to have our children, we had also paved the way to interior religious freedom, a more profound transformation.

This clash of conservative and liberal ideologies resounded in multiple assemblies in 1969. Jay and I, mired in domesticity, became armchair activists. The summer before Jay had joined the protesters as they marched from Lincoln Park to the Democratic Convention. Two years before I had walked the street as a striker, demanding better more equitable pay for country employees. In 1969, we watched as others took up the pickets. Live television coverage of the tumultuous events of that year brought war, protest, and riot into our living room.

We witnessed inspiring moments such as when we jammed into a

neighbor’s tiny apartment living room with about twenty young parents and almost as many babies, all eyes glued to the fourteen-inch screen as Neil Armstrong stepped onto the surface of moon. There was absolute silence in the room.  Even the little ones hushed their voices as he recited, “One small step for man, one giant step for mankind.”  And we believed it too. We grew up listening to space adventures on the radio and following space heroes in the comic books.  In some ways it’s hard to believe that “Star Wars” is still a fantasy.

playing to the herds and the nerds

With less pride, but no less excitement, we tuned into Woodstock, that glorious fiasco that ripped the curtain off any hope that the old order

could stand. We tuned in to hear the music, but stayed glued to the tube by scenes of “debauchery.” It would take months before the full story of what happened when 300,000 music fanatics showed up instead of the expected 50,000.  But one of the inevitable results was the same as one being anticipated in our present predicament – more babies.

The cultural shift did not limit itself to the “hippies” milling around on a dairy farm in upstate New York. Right in the heart of New York City itself earlier that summer, Oh, Calcutta had opened on Broadway. Since

full-frontal nudity was central to this production, it did not appear on our television screens, but we read about it in the Chicago Tribune, and discussed it with friends over beers on the common patio of our apartment complex.  In those days of “never trust anyone over thirty,” the general consensus among us was that censoring the play was an abuse of power. On the other hand, none of us was quite ready to shell out for the tickets when it came to Chicago.

Of all the grand events that took place that year, the one that moved me the most was the Moratorium against the Vietnam War that swelled up in the Autumn. Sitting home while the protestors marched in cities around the world tore at our souls. Two million Americans of all ages and backgrounds took to the streets and assembled in churches, schools and meeting halls. Dr. Spock broke out of his persona as the optimistic childcare expert to address the rally in Washington. That more than anything made me realize that all those people were marching, protesting, demonstrating to protest the sweet baby in my arms. But I couldn’t bring myself to take her into the streets.

I couldn’t convince Jay to go. He held that as an Assistant State’s Attorney he was an official representative of law and order. That status forbade his participation. So, even at the domestic level skirmishes 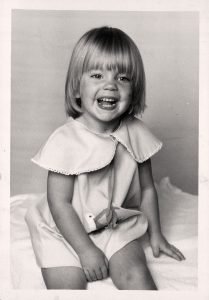 between the old order and the new played out. I feel certain ours was not the only household to witness such a divide. Love for us triumphed over political difference. We refocused even more intently on building a good life for our daughter.

Rob Kilpatrick’s enlightening and entertaining book, 1969:The Year Everything Changed, http://(https://www.goodreads.com/book/show/6139711-1969) cover the immense scope of the  sweeping changes that zipped through every aspect of human life that year. Then as now committed, however, loving relationships thrived, families grew and prospered, hearts broke, elders passed on, and in a thousand other ways everyday life moved steadfast as the rising and setting of the sun.

There is a time for everything,
and a season for every activity under the heavens:

Whatever is has already been,
and what will be has been before;

There are many important events from that year that I haven’t room to include.  What do you remember about 1969?  How did it influence your life? Or was there another year that changed “everything” for you?

Get Notified When New Blogs Are Posted!