As I turned thirteen on September 8, 1955, I was still pretty much a child, taller and heavier than I had been at ten, but with much the same perspective on life, a proverbial “late-bloomer.” Within twelve months, my life would be turned upside down, but I had no hint of such a transformation on my birthday. As far back as my memory could take me, my life had followed a set pattern.

The way I lived mirrored the lives of my peers, the children of my neighborhood and my grade school.  Ours was a working-class neighborhood of Detroit during a time of relative prosperity and rigid roles. Every father I knew had a job. Every mother remained at home keeping house and watching over the children. The only diversity in our community was religious. Some families were Catholic; others were Protestant, but everyone attended one Christian church or another.

life under a shadow

This life, I had been taught to believe, was one of great fortune. As long as I could remember, my parents’ and my grandparents told my sibling and me stories about life during the Great Depression and World War II. Both my parents’ fathers had lost their jobs at one point. Each family had struggled to afford even the basic necessities.

War II. My mother’s brother was killed in Belgium. Scarred as they were by the traumas of their own youth, my mom and dad felt it imperative that their own children realize how privileged they were. We were lucky, they said, to carry lunch boxes filled with food and come home to a full dinner every night. Even when we weren’t hungry, we were expected to eat because it was a “sin” to pass up good food.

The one glitch in these secure lives were the regular school drills in which we practiced crouching beneath our desks in case of an enemy bombing. While we know now that such precautions would have been little protection against a nuclear attack, in the mid-1950s our true sense of security came from living in Detroit, Michigan. We felt far away from the range of Russian bombers. If anything, we worried more about invasions from Mars.

That autumn, however, I was about to experience three turning points much more unsettling than mere Martian landings.

out of the shadows 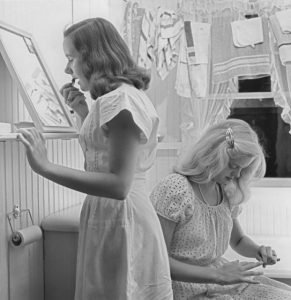 First, my acne began to clear up, to gradually fade away without leaving any scars. At the time I firmly believed that this wonderful development resulted from the strict diet my dermatologist has prescribed. This diet forbid chocolate, “fried foods,” gravy and butter. I followed it religiously. Believing as I did that it had cured my acne, I stuck to that food regime all through high school. As a result, not only did my skin clear up, but I slimmed down.  I didn’t actually lose any weight, but I grew several inches without gaining a single pound.

Following this physical transformation came a social one. The upper-grade girls of my school, St. Brigid’s, elected me President of the Sodality of Our Lady. This school organization, composed of all the girls from grades five through eight, met regularly to say the Rosary and dedicate our lives to the service of Mary. The election had no campaign. On a given day, all the eligible girls wrote the name of a girl they thought to be the model of a good Catholic, on a ballot. The nuns, our teachers, collected the ballots and counted them that night. In the morning they announced the new President.  I had not known that many girls knew my name, let alone that they would vote for me. The election caused me to reframe my understanding of my own potential.

The best part of being elected to this presidency came in May. It meant I would crown the statue of Mary with roses at the end of the Marian Procession. For that occasion, my mother tailored her wedding dress so that it fit me. I felt truly beautiful as I marched solemnly down the aisle behind a double row of choir boys. But my trip up the ladder to place Our Lady’s crown over her carved stone veil was absolutely terrifying.

Soon after the May crowning, a third event set my whole life on a different course.  My father asked me, my sister, and my two brothers to remain at the dinner table after dessert one night in April. This was highly unprecedented since ordinarily I would have been expected to immediately start clearing plates and begin doing the dishes. Dad announced that we were going to be moving as soon as I graduated from the eighth grade in June. He had accepted a new job in Indiana.

The announcement left us first in shock and then full of questions. My mother, we quickly learned, was deeply unhappy about the move. Her widowed mother lived across the street from us, and she didn’t want to leave her behind. Mom had moved to Detroit from Pittsburgh with her family and remembered how hard it was to settle into a new city. But my father’s opportunity was a chance to move up in his career beyond anything he had ever expected.  He couldn’t fathom turning the opportunity down.

For me, the whole idea of leaving Detroit and starting life in a new state was

beyond exciting.  I had expected to attend a nearby Catholic all-girls school. Indiana sounded much more adventurous. We were leaving a neighborhood where over half the families were Catholic and moving a small city with no Catholic high school and only one Catholic church. I had begun to change internally. This move would allow me to try out my new wings away from my old roots.

Dreams of becoming a nun slipped away as visions of enchanted evenings and tall dark strangers took their  place.

Dear Readers, Share a time when your life changed abruptly and for the better.

“Don’t worry if people think you’re crazy. You are crazy. You have that kind of intoxicating insanity that lets other people dream outside of the lines and become who they’re destined to be.”
― Jennifer Elisabeth, Born Ready: Unleash Your Inner Dream Girl

Spending a lot of evenings at home? Spark them up!

Check out the Fun Couples Only exercises Here:

For Better Rather Than Worse — Fun Fill Ins For Couples