pulling it all together

The holiday season is a time of abundance, a time of more of everything. And one of the things there tends to be more of around our household at this time of year is conflict. This is not a new experience, but one that descended upon us the first time we set out to celebrate a major holiday together. It took us completely by surprise.

Familiar as we were with the biblical verse, “And the two shall become one flesh’ so then they are no longer two, but one flesh,” its full meaning didn’t reveal itself until the Easter Sunday just three months after we married.

who is the family?

For both of us, holidays were first and foremost about spending the day with our family and secondarily about the actual feast that the day commemorated. But in our first year of marriage, the meaning of the words, “our family,” became confused. Who were “our family?” What John Gottman has named the “we-ness of us,” meaning the solidarity of husband and wife, was still so new that neither of us considered our married partnership a “family” per se. My husband and I were both the eldest children in large families. Although we never voiced it aloud, we assumed that a couple without children wasn’t a family.

A couple of idiosyncrasies in our family backgrounds also left us unprepared for a holiday battle.  Jay’s family had simply always celebrated holidays and every occasion of note with his mother’s family.  No questions asked. His father’s family history stayed shrouded in mystery. During my own childhood, my extended family was small enough that we all gathered, my mother’s and my father’s family, together for not only holidays but vacations as well.

Then that Easter rolled around and a decision had to be made, one neither of us had ever faced before. With which family would we spend the day? Jay assumed we would do the “reasonable” thing and join his family at his grandparents’ home, which was only a half hour from our apartment on the northside of Chicago.   I maintained that we saw plenty of his family in any given week. It was only “fair” I declared that we drive to St. Paul to spend Easter with my family.  When the lines are drawn between “reasonable” and “fair,” even Supreme Court Justices have their hands full. The decision process overwhelmed two young people in their early twenties.

at odds and out of kilter

Conflict between committed partners is inevitable.  As true as I know those words to be, whenever I find myself at odds with my husband, life feels out of kilter. Thus, when a rancorous debate drove Jay and I apart for days and seemed to have no possible solutions, it convinced me I had married the wrong man.

Experts tell us that it isn’t fighting that drives couples apart, but the nature of their arguments. That early clash followed none of the experts’ rules. We were so shocked to be enraged with one another, words of contempt and distrust flew threw the air like knives in a circus act. And just as miraculously none of them resulted in a fatal wound. What won the day finally were tears. I broke down sobbing about how much I missed my parents and siblings even though before our fight I hadn’t been conscious of that longing. That won Jay’s heart.

healing as we journey 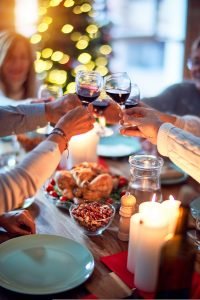 Our trip through Wisconsin affected a sweet healing.  The countryside was bursting with new life in the happiest of yellow-greens. Roadside stands sold daffodils by the dozens. It rained much of the way, but just past Eau Claire, a rainbow broke through the clouds.  By that time, our seven-hour conversation had led us to our own pot of gold.  We had worked out a way to alternate with whom we would spend our future holidays.

Jay and I not only resolved that conflict, but more profoundly we learned that we could engage in even deeply rancorous disagreements, but our solidarity was stronger than we had known and would see us through such troubled times. Since that time, this stalwart sense of “we-ness” has gotten us through hazards much difficult to negotiate than that first major confrontation.

Being deeply loved by someone gives you strength. While loving someone deeply, gives you courage. Lao Tzu

Have the holidays raised a conflict for your family?  How did you find your way through?

One Reply to “Surviving the Holidays”