My Favorite Day of the Year

Today is Winter Solstice. The winter solstice is the moment in the year when Earth is tilted as far away from the sun as it will be all year. For the northern half of the planet, the winter solstice results in the shortest day of the year, meaning it has the longest period of darkness.

For as long as I can remember, I have loved this day, loved the whole idea that the light that slowly seeped away from us over the last six months is about to return.  The darkness cannot overtake us. I rejoice to know that I, along with millions of other earthly creatures, am tilting back toward the sun. At the same time, I delight in the grand array of artificial light my own species threads throughout the habitats of humanity. These cheerful beacons do not deny the darkness. Rather they proclaim that we recognize the allure of sparking light against velvet darkness. This magic combination lifts spirits and call us to make merry. Every couple must, I claimed at the beginning of this series of posts, grasp every possible reason to celebrate that comes their way.  This time of year is one of the best.

I have an odd but intent affinity for the season. My name, Jule, is an Anglicized version of the Norwegian word for Christmas, “Jul.” In Nordic tradition “Jul” stretches out for weeks. In pre-Christian times, it began around what would be for us today, mid-December and lasted until mid-January.  The time period was a month called “Ylir.” It was associated with the god, Odin. One of his many names is Jólnir which comes from the word Jól. In those ancient days, Odin traveled around Midearth more than usual visiting the locals. The children will fill socks with hay for his horse Sleipnir, and Odin might give them a small gift in return.

Even today Santa Claus is not the most common Christmas icon in Norway. That honour goes to julenisse. A creation from Scandinavian folklore, a nisse (tomte in Sweden) is a short creature with a long white beard and a red hat. Julenisse means the gift-bearing nisse at Christmas time.

You may be more familiar with another Anglicized version of “Jul,” which is Yule. This pronunciation most likely came about because the letter “J” in Norwegian and Swedish sounds more like the English “Y” than the English “J.”  This means that while all my life the sound of my name has been identical to the word, “Jewel,” it would be more properly pronounced “Yoo-laa.” But I’ll save the whole story of how I came to be named one name and called another for another day.

me. There are so very many ways these people of the far north have of pushing back against the dark and the cold it can be breath taking just to read about them. We’ve all heard of the Yule Log.  For many of us, it’s a kind log-shaped cake, one of many mouth-watering sweets in which we indulge at this time of year.

The cake, however, takes its name from a very special Norse ritual. Their tradition calls for a whole tree (not just a log!) to be brought into the home to burn for the entire 12 days of Christmas. I feel all soft and fuzzy inside writing about that single tree giving 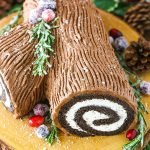 its whole life to bring light and warmth to a family in the midst of the frigid darkness. Humans could do well to emulate the tree. Just in case you don’t have a whole tree to burn, here’s a recipe for the cake.

Those hearty Nordic folk are not, however, spending their time curled up on cozy sofas staring into the fire. No way.  They are off celebrating at multiple julebord. I have to admit – it’s super cool to share a name with such a spectacular tradition. These communal gatherings serve up trays ladened with traditional food. The most common popular dish Christmas Eve dish is ribbe,

or seasoned pork belly. It’s usually served with sauerkraut and redcurrant sauce. Christmas sausages, cranberry sauce, and fried apple slices with honey are other common accompaniments. Here’s one that might not sound wonderful to you, but 70% of Norwegians feast on pinnekjøtt sometime over the  season. Pinnekjøtt, which translates literally into English as ‘stick meat.’ is dried and salted sheep ribs. https://www.lifeinnorway.net/christmas-food/

Usually guests and hosts consume large amounts of alcohol and then head out to a late-night party. With true festive fervor, every company, school, sports club and social group hosts their own julebord. Over the season, one most Norwegians attend two or more of these events. So, it’s no wonder that after the somewhat quieter family celebration of Julaften (Christmas Eve), the day when Norwegians exchange gifts, Norwegians welcome romjul.

time in between times

Romjul is their name for the period between Christmas and New Year’s. It roughly translates to mean a time when no one knows what to do. I can totally relate to that. If any of you have ever been at work, as I have in the past, during this particular week, you probably know what the Scandinavians mean.  Doldrums set in at work.  By Christmas, we’ve wrapped up most big project.  There’s not enough time to launch a new venture. Everyone’s still a little hung over from all that Christmas cheer while gearing up to celebrate New Year’s Eve.

And that’s just at work. At home the Christmas bubble deflates as the letdown of no more gifts sets in for the kids and diet regret takes over the adults. No one wants to watch their favorite Christmas movies any more. Going out to play is a major process of gearing up and doesn’t last for long. Yes, I have to go along with the Norwegians.  That week deserves its own name and romjul sounds just right.

When it comes to this blog, I think it’s only fair to let you know, I’ll be observing romjul and giving you a break from reading it for a week.  See you in 2021. Until then – –