a dolar a day on michigan avenue 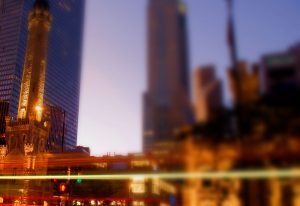 When I first left St. Mary’s college after four years of work and study, I hadn’t quite yet earned a bachelor’s degree, but once Jay and I became engaged, I was determined to move to Chicago to be closer to him. As I had no job and no savings, I needed a truly cheap place to live. Jay found just the thing for me – one block of the corner of Chicago and Michigan Avenues. The rent was seven dollars a week, an unbeatable bargain even half a century ago. My room, which I shared with three young women I had never met before, was on the sixteenth floor of Loyola Towers. It housed the downtown campus of Loyola University and Catholic Women’s Club; a residence where Catholic single women could live “safe” men – whatever that meant.

The lobby, lounge and dining room of the club occupied the twelfth floor above which were three stories of one-bedroom apartments. These inhabitants of those apartments tended to be older, silver-haired maiden ladies.  But the large dormitory space which took up the entire sixteenth floor housed sixteen young twenty-somethings in four miniscule four bedrooms. We all shared a huge, old-fashioned bathroom with four shower stalls, 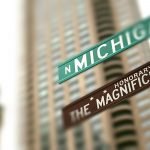 eight sinks, and enclosed toilets. It also served as our social center since the space had no living room. Another perk of this unique living space was that for an additional eight dollars a week, you could eat two meals a day in the dining room.  But that was too rich for my blood and I depended on Jay to keep me fed.

From the day I moved in, Jay and I discovered the lure of Michigan Avenue. That was a year before the John Hancock Tower would soar 100 stories into the sky at a cost of $100 million (1965) dollars. So, the avenue we first fell in love with was a dowager duchess, down at the heels and living on the memories of past glories.

The street that Jay and I strolled in the early days of our marriage was quiet and uncrowded. We considered it our own private city paradise.  We loved it just as it was. Our favorite restaurant was

the Charmet’s Diner, where the two of us could get a complete meal for under five dollars.  That was when we drink milk with our meals instead of wine. And amazingly Jay had eyes only for me because the diner was a favorite of the students from the modeling school upstairs. We had no desire to see the “Boule Mich” become popular.  https://www.classicchicagomagazine.com/michigan-avenue-in-the-1960s/

Jay had begun and ended his work day at the corner of Chicago Avenue and Michigan Avenue every summer since he graduated high school. He worked in the Chicago Avenue pumping station across the street from the Chicago Water Tower. Because it was one of the only buildings to survive the Great Fire of 1871, the Water Tower has become synonymous with Chicago’s momentous rebirth after the fire. https://www.themagnificentmile.com/neighborhood/history

a grand plan that went awry

In 1909, city businessmen developed a long-term plan that envisioned the section of Michigan Avenue that ran from the Chicago River to Lake Michigan as the equivalent of Paris’

Champs-Elysees. First, they had to lobby successfully for a bridge to connect the north and south ends of the street. When that was complete in 1920, the Wrigley Building, patterned on the Seville Cathedral’s Giralda Tower, opened, housing 21 stories of commercial and retail establishments. Next rose the gothic Tribune Tower, followed rapidly by several other equally ornate white stone edifices, including the beautiful Fourth Presbyterian Church near the top of the avenue. This building would be right at home in the English countryside. The ground floors of these buildings filled with sophisticated shops and the sidewalks were crowded with elegant shoppers in the daring new styles of the Roaring Twenties.

Then the stock market crashed and so did Michigan Avenue. No new buildings appeared. Stores were shuttered. Shoppers disappeared.

In 1947, real estate developer Arthur Rubloff coined the term, “The Magnificent Mile” and set about its rejuvenation. Over the next twenty years, stores sporadically renovated and re-opened. Some new ones were constructed. A few restaurants appeared, but the avenue couldn’t compete either with the flagship stores of Chicago’s Loop or the new bustling suburban malls.

In December, Jay and I married and moved north to Rogers Park, but since it was absolutely free entertainment strolling Michigan Avenue ranked near the top of our weekend pastimes. Three years later, when we had both finished school and both had full time jobs. We moved and once again the famed boulevard was but a short walk from our own front door. Our loft on Wabash 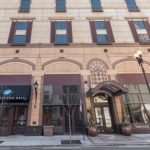 Avenue had been built in the 1920s as part of a building designed to house artists. We loved not just the soaring ceilings and high windows, but the genuine cork floors and the tiny wood-burning fireplace. As a bonus we could crawl out our window onto a rooftop and sunbathe. Best of all, “our street” was just a block away.

Life as parents pulled us away from the loft but not from Michigan Avenue. Like many Chicagoans, including the majority of our friends, we often decided that fair-weather days in the Windy City held so much allure that it would be foolish to leave our hometown during late spring, summer or early autumn.  Better, we agreed, to escape during a dreary November or a blizzardy January than to leave during a brilliant day in July.  There were the parks. Even watching the Cubs lose was fun in Wrigley Field’s $1-bleacher seats. Grant Park outdoor concerts offered

free music that cost a fortune during the season. And, for Jay and me, a stroll down Michigan Avenue was still the best possible way to spend a day off.  If we could have had our way, it would have remained as quiet and uncrowded as it had been in the early days of our marriage.

People with far more influence than we, however, saw things quite differently. In the mid-1970s, Michigan Avenue found its answer to the suburban malls. Water Tower Place, the country’s first urban vertical mall, introduced a multi-purpose use of space containing retail, dining, entertainment, hotel and residential units. “In an attempt to avoid a canyon-like effect, this monumental structure was built with graduated setbacks that allow light to peek over the building tops and preserve the flowers and trees on the Avenue.” (https://www.themagnificentmile.com/neighborhood/history/)

into the 21st century with a new generation 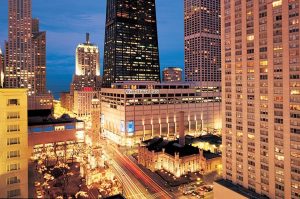 This initiated a building boom that continues today, but Jay and I were not jaded enough to let the evolution of the grand dame end our love affair with her. We may have preferred that the crowds were smaller, but we couldn’t stay away any more than all those other folks could. It is possible to pass a glorious day on Michigan Avenue and run through a thousand dollars. One can also enjoy a delightful day, spending practically nothing.

Over the last half-century, we’ve done both. We loved the shopping sprees and treasure those days that were just for dreaming, like the one we spent entirely in art galleries absorbed in beautiful pieces priced far beyond our means. Or the times, our splurge has been to share a hot fudge sundae at Ghirardelli’s even though we consider the ice cream parlor a foreign intruder. One of best moments was toasting my sixtieth birthday while our grandson Bryce, just learning to walk, wobbly balanced around the elegant furnishings of the Drake Hotel lobby.  I was so happy to be sharing my favorite place with the next generation.

In some magical manner that can’t quite be put in words, Michigan Avenue triggers our best feelings of “this is us.” I picture the Water Tower and a thousand other joyful, funny, mysterious images crowd into my imagination. If I could “turn, turn, turn,” I’d wish myself right back there, right now.

If you could be anywhere you wanted to be at this very moment, where would it be?