Over the last two blog posts, I’ve shared two events in my own “coming-of-age” experiences when my world suddenly became much wider.

This week a guest blogger, Nancy Louise, weaves a tale similar and yet very different than those stories of a time in her childhood when the door to a possible new life opened up for her. 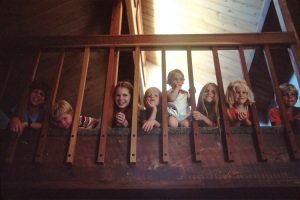 Right before my ninth birthday my Daddy was killed in a car accident in Shreveport, Louisiana, one of the many towns I’d lived in over the course of my short life. His death left my Mama with six young’uns, under the age of ten to raise on her own. I was the second oldest. Unable to consider employment and with no means of support, Mama moved us into ‘The Projects,” free housing for indigent families. We froze in the winter and sweltered in the summer, but we stayed together with a roof over our head.

The Federal Housing Projects of the 1950’s was very basic. Everything was concrete and hard metal. And HOT! Hard Edged. Teaming with kids. And noisy. Always very, very noisy. I loved to escape—if only for a little while, if only in my imagination.

a trick of the imagination

Of course, we had no car. We lugged our groceries home on foot. As the oldest girl —that task frequently fell to me. From our apartment house, in one direction on Southern Avenue stood the A&P, the source of most of our groceries. But in my fantasy world, I trekked not to a supermarket, but to deepest Africa. On my way home, I strode down Southern Avenue precariously balancing dry goods, such as a 25-pound sack of flour on my head. As I bounced along, I swayed my hips and sang nonsense words what I told myself was “jungle language.” I was no longer a Southern school girl; I had morphed into a bearer on Safari! The blessing of a great imagination lit up my dull, everyday life!

In the other direction on Southern was “The Cotton Boll”—an early convenience store with higher prices and, therefore, only used for “emergencies” —like when we ran out the baby’s milk a.k.a. a can of Pet.

One fine spring day Mama sent me up to the Cotton Boll to fetch something-or-other—she probably hoped quickly! On the four-block walk, I passed by a huge empty lot that backed up to a ridge with the railroad tracks on top. The lot looked nasty, filled with high weeds, scrubby bushes, rusted out car parts and trash. 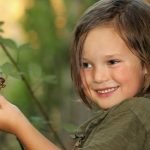 Always a curious child, I forgot my mother’s urgency, and I decided to “explore” the lot, just as any self-respecting adventurer would do.  Also, I was in search of blackberry bushes, which I knew grew plentifully along the top of that ridge on the rail road tracks. Blackberries were the only fresh fruit we could afford growing up because they were free for the picking. But I didn’t find any blackberries.

Instead, there in the back corner of the lot I found something I never expected to see. An enormous patch of purple irises in full bloom! I have no idea how they got there. Perhaps in the far distant past there had been a house on the lot and had irises graced the back yard. Or perhaps one bulb floated in on a strong wind one day, took root and multiplied as irises are wont to do.

a place for dreaming

But for whatever reason…there they were. Totally unknown to the world. . .except me! I got down on all fours, crawled past the brambles and weeds into the patch, I carefully turned over on my back in such a way that all I could see was a wide, open sky framed by the purple blooms. As I lay in total quiet of my hidden garden, my heart swelled and out of nowhere, as though spoken by the wind, words swept into my head, “THE SKY’S THE LIMIT”.

I never shared the secret of the irises with anyone. But each spring for years after, I would make a pilgrimage to “my garden,” lie in the blooms, and dream – very big dreams of a life that would take me far beyond “the projects.”

As a first step toward the dream, at sixteen I entered the convent. While I prepared for a life of dedicated sisterhood, “progress” came to my old neighborhood. Southern Avenue was ripped up.  The A&P and the Cotton Boll were torn down to make room for the Interstate. My irises disappeared forever.

After four years, I left the convent, a good, but heartbreaking decision. The move thrust me unawares into the American 60s.  New things were “Blowing’ in the Wind”. I couldn’t go back home. My dreams still tugged at me. I went into training to become an airline stewardess. (Never a “flight attendant” mind you. But that’s another story!) My “stew” job launched me into a career in travel.

Just as I dreamed in my garden, I left the projects far behind. I spent my life leading tour groups to every corners of the world. With each and every trip, I grew more and more aware of that God always walked with me, showing me those Limitless Skies.