When you least expected it

Our fourth child and only son had a way of quietly disappearing just when you least expected it. So, maybe his unexpected death at age thirty shouldn’t have taken us so much by surprise. But it did and in my dreams, I keep looking for him, certain I’ll find him just as we did those many other times.

The secret to Johnny’s ability to disappear so quickly was he never gave himself away. He was simply there one minute and poof! Gone the next.

His same age cousin Danny was just the opposite. When presented with a new baby brother, Danny had told his parents he didn’t want a brother. They would have to take this squalling infant back to the hospital where they had got him.  When his parents insisted that Jamie was there to stay, his six-year-old brother proclaimed, “Okay, I’m running away from home.”

His distracted, tired mom Amy replied, “Go ahead.” Danny then packed his Spiderman backpack full of food and slammed out the back door. Fifteen minutes later their phone rang.  A neighboring mom, who lived three houses away, told Amy, “Danny is at our house, and he says that you told him it was okay to run away.  He wants to know if he can live with us.”

wandering to, not from

Johnny never announced his intention to leave.  He wasn’t running away. He was wandering to … albeit he didn’t know where. The first time I couldn’t find him he was barely six months old. I had run to kitchen to check on a stew on the stove and left him with his big sister playing on the floor in the den while she watched TV. Less than three minutes later, I returned to find him gone. A very agile baby, Johnny had been crawling since he turned five months old and lately had begun to pull himself up on pieces of furniture. But I was sure that wouldn’t take him very far. 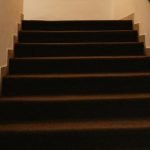 I ransacked the first floor, checking under tables and behind sofas and chairs seeking my baby. No luck. Suddenly, I heard thud, thud, thud, and a shrill cry from the direction of the stairs to the second floor. Betsy who had been helping me hunt raced up the steps and found her brother wailing on the second-floor landing.  He had climbed to the top of the stairs, but hadn’t known how to negotiate the downward trip. It was time to get some baby gates up – something his sisters hadn’t need until they were at least one year old.

I learned from then on to keep a close eye on my adventurous preschooler, but there were still times he could slip out of sight if I were distracted by a phone call or engaged in making dinner.  One such evening, realizing I hadn’t caught sight of the four-year Johnny in a while, I left whatever I was preparing simmer while I did a house-wide search.

By now we had moved into a Victorian era, three-story row house on Belden

Avenue in Chicago’s Lincoln Park neighborhood. The home had five staircases and twelve rooms, not including the basement playroom. I made a whirlwind quest through all four floors of the house. No Johnny. Beginning to panic – just a little – after all, this wasn’t the first time he had done this. I pulled his sisters from whatever they were doing and sent them out into the immediate neighborhood to look for him, all the while telling myself I would surely have noticed if he had gone out the door.

Setting about a more thorough search of the house from top to bottom, I checked closets and corners of bedrooms between beds and window walls. No sign of Johnny in any nook or cranny. Just as I came down the front staircase to the first floor, Carrie and Betsy rushed in the door, saying they hadn’t been able to locate him in anyone’s yard and none of the neighbors had spotted him.

When I got halfway down the stairs, a slight movement fluttered at the corner of my eye. I turned sideways and looked down into the large, square foyer. There on the top of our enormous, upright piano sprawled my little boy, sound asleep. Laughter gurgled up from my belly and a grin tugged at the corners of my mouth.  I looked back at the girls and pointed to their brother.

“Johnny,” Betsy exclaimed.  But he didn’t stir an inch. Still, I had to wake him. It had been a miracle he hadn’t tumbled off in his sleep. Did he climb up there with a purpose in mind? We would never know. Maybe it simply looked like a nice quiet place to lay his tired head. 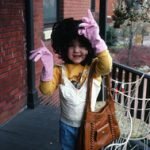 Johnny had to overcome serious barriers in his struggle to lead a normal life. To help him cope in the best way possible, we enrolled him at age twelve at Misericordia, a residential school for children with development challenges

We felt grateful that Johnny remained ambulatory and coordinated.  His independence of spirit, however, continued to work at cross purposes to his poor grasp of reality. He had a way of going very quietly about doing his own thing whenever the adults responsible for his care let down their guard. His Misericordia caretakers gave him the nickname, “the stealth kid.” One May morning, he gave everyone involved in his care a genuine scare.

Jay and I both took the “L” train to the Loop, Jay to his office and me to the DePaul downtown campus. When Jay arrived at his office, his secretary greeted him saying Johnny’s school needed him to call right away. He phoned the administrator of Johnny’s apartment at Misericordia.  She was extremely anxious. That morning at Misericordia, Johnny had gotten on his school bus as usual, but his teacher called his apartment to ask why they hadn’t reported that he would be absent. Johnny’s house mother told them, “Because he got on the bus this morning.”

Johnny’s bus would have ordinarily dropped him at school at nine o’clock. By now it was nine-thirty and no one knew where Johnny might be.  When I later heard the story, I thanked my lucky stars that for once it wasn’t my heart being twisted in knots. By the time Jay was able to reach me later in the day, Johnny had been found and was on the school bus on his way back to Misericordia.

He had been discovered asleep on the back seat of the bus in the parking lot in which the bus driver stationed it in during the day. Thankfully the day was mild neither hot nor cold. It seemed that as the bus aide had lowered the lift from the bus’s side door to allow the children in wheelchairs to exit, the ambulatory kids usually went out the front door. That day, however, Johnny slipped to the back of the bus earlier. When the driver and the aide looked over the bus, it appeared empty. The aide went into school and the driver parked the bus and went home.

Once again Johnny was fine, but the people that cared most about him felt like they’d been put through a wringer. Sadly, the bus driver, a woman I really loved for her kindness to the special kids she worked with every day was suspended from her job. While in some way, I knew that she and the aide weren’t as responsible as they should have been, I could personally testify that the “stealth kid” could act in ways that were very hard to anticipate. Because he stayed so quiet, it could be hard to catch him when he chose to go his own way.

with gratitude to angels

Through the years I could only accept that angels walked with Johnny. He so easily could have wandered into certain danger and never did. Even though a sudden expected brain bleed took him from us shortly before his thirtieth birthday, he slipped away quickly. He was in no pain. He wasn’t afraid.  Nothing would ever fill the empty place he left in my heart. I was grateful, though, for the deep assurance that he was as safe now as he’d always been, guided home by angels.

“But where do you live mostly now?”
With the lost boys.”
Who are they?”
They are the children who fall out of their perambulators when the nurse is looking the other way. If they are not claimed in seven days they are sent far away to the Neverland to defray expanses. I’m captain.”
What fun it must be!”
Yes,” said cunning Peter, “but we are rather lonely. You see we have no female companionship.”
Are none of the others girls?”
Oh no; girls, you know, are much too clever to fall out of their prams.”
― J.M. Barrie, Peter Pan https://www.goodreads.com/quotes/tag/lost-boys