We’re beginning to take chances. Throughout the country, folks, who have carefully sequestered themselves within their own homes for the last three months, are dipping their toes in the shallows of social life.  Indeed, some are high diving into the deep end of the pool. But the splash as they hit the water causes ripples of alarm. Most people are content right now to simply test the waters in some tentative way.  Sometimes this means a trip to the doctor’s office. There are also people returning to reopened churches. For my daughter and her family, it means literally getting back in the water.

I watched enviously yesterday as they packed up their camping gear and secured their large bright yellow raft to the back of their SUV. They were going rafting, their favorite fair weather activity. State parks and boat ramps

reopened. The weather brightened. And their small family was out of here! Being among the vulnerable elders of the nation, my husband and I are not quite ready to join them. That goes very much against the grain for us.

Hitting the road  at least a few times a year has characterized our entire married life. In fact, it began before Jay and I married. The roads we choose are not necessarily the ones less chosen. In fact, some of journeys include popular tourist spots, which present an oft repeated irony – naturally beautiful spaces where most of the attractions are entirely artificial – each aspect a dimension of escape.

Such destinations are often derided by sophisticated travelers, but for us, inveterate road trippers, they were as enriching as a trip abroad. A road trip is essentially a trip “from,” not a trip “to.” While we almost always have an endpoint in mind, we mostly road trip to leave something behind — the ordinary rhythm of daily life, a job that’s gotten to be a bit of a grind, or even the over familiarity of friends and family and our home space. These trips also serve us times to renew our committed relationship, a time when Love’s Lessons can be savored and enhanced through long hours of intimate, private conversation not usually possible in the busy hustle of everyday life.

Jay and I took our first road trip during spring break of Jay’s senior year at Notre Dame. It was a thirteen-hour journey from Chicago to St. Paul. If you know anything about Midwest American geography, you realize, barring a blizzard, the 400-mile journey by auto between those two cities ought to take between seven and eight and a half hours. Certainly, my parents who were waiting to meet the new important guy in my life, expected our trip to took that long and began to mildly panic after ten hours. 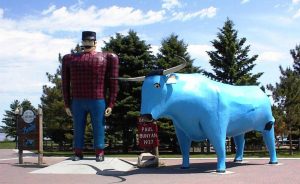 Had we focused our attention on simply arriving in the Twin Cities, we would have taken the fastest roads and made the least number of stops possible. But, since, without acknowledging it even to ourselves, we had set off on a road trip, we quickly became bored with commercialism and heavy traffic of the main route and veered off onto a series of county back roads that meandered rather than headed toward the Minnesota border.  While we rambled, we stopped frequently.  We pulled over and read every historical marker along the way.  At the base of a ranger station, we parked and climbed to the top. Spotting a gigantic statue of Paul Bunyan, we climbed out, took each other’s photo and enjoyed a lumberjack breakfast at the restaurant of the same name, a place where everyone ate family style at long picnic tables.

It never occurred to us to look for a phone booth and check in. Our own little bubble of surreality disconnected from where we’d been and where we were going. At journey’s end, we apologized profusely to my worried parents, but weren’t truly sorry.   In our mind’s eye churned the plans for the next “adventure.” Let’s get back to the Wisconsin Dells, we told each other, determined to make it soon.

We got our chance the first summer of our marriage. I had finally been at my job long enough to accrue a few vacation days, and Jay was taking the summer off to study for the bar. Two days after law school graduation, we once again pointed the trunk of our Volkswagen Beetle northwest and headed out.

What is a dell?

According to most English dictionaries, a dell is “a tiny valley in a wooded area, tucked away from the rest of civilization.” https://www.yourdictionary.com/dell 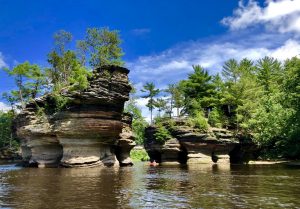 definition if one stretches the meaning beyond recognition. In part because the English word usually comes from a German root whereas the Dells of the Wisconsin River derived their name from the French word “dalles,” meaning slab-like rocks. An 1892 photograph of those rocks began the pilgrimage that now draws millions of visitors every year to a 5-mile gorge on the Wisconsin River, noted for the beauty of its unique Cambrian sandstone rock formations and tributary canyons. https://en.wikipedia.org/wiki/Dells_of_the_Wisconsin_River

This natural phenomenon is lovely to see, but most likely would not keep thousands of visitors coming back every year.  Over the course of the last one hundred years, however, human endeavor has added attractions and enticements galore that lure the tourists and make this mildly interesting natural beauty a “must see.”

it’s over over there

It all began with the Ducks – not the aquatic bird, but the DUKW, an amphibious truck that leapt off the drawing board in 1942 and greatly contributed to the Allied landings in Europe during World War II. Over 21,000 were built. When the war was over, just like the other returning troops, they needed jobs. Some made their way to the middle of Wisconsin.

In 1946, the world’s first Duck tour was launched. The amphibious trucks take on passengers at a landing on the Wisconsin River and proceed downriver to Lake Delton. They climb over sand bars, traverse over four miles of otherwise unnavigable river, allowing their passengers an up-close view of the unique beauty of the actual “dells” themselves.  https://www.wisconsinducktours.com/

Watch them in action: https://youtu.be/62n0hUZadm0

For a fun, quirky look at working on these big water “birds,” check out Jason Albert’s memoir blog https://themorningnews.org/article/down-and-out-in-a-repurposed-troop-carrier.

tourist trap? Yes, so what?

The opportunity to take that up-close and personal ride through the Dells appealed to Jay and me, but just as enticing was the chance to stay in a motel with actual indoor swimming pool. (Because the first water park opened in the Dells in 1989, it was only more recently that it became the Water Park Capital of the World.)

Trying a different cuisine for every meal added to the novelty as did our trip to the Ripley’s Believe It or Not Museum.  Finally, of course, we amused ourselves for hours trying our luck at the indoor arcades and buying useless objects at the souvenir shops. We wallowed in having no schedule and pretended to have no budget. We lived a few days in La-La Land and found it good.

Years after that road trip, I climbed the Eiffel Tower and I basked on the beaches of Bali, two of the world’s top ten destinations. Did they outshine the Wisconsin Dells? Of course.  Did I have more fun? It would be like comparing apples to oranges. Back in the 1960s, Jay and I accepted the offer of a time out of time closer at hand. For us, such getaways came to be a regular part of life’s rhythm, a way to retain our sanity in this crazy world.  Honeymoons are not once in a lifetime events.  They bear repeating again and again.  Our relationship deserves that kind of consideration.

Thus, it’s one of the harsher realities of living through the pandemic as vulnerable seniors that honeymoons are on hold for us.  We love our home garden, but I sure could go for a DUKW ride right now. 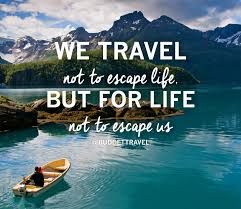