How is it, I wondered over and over, as my children grew from tiny infants to full-fledged adults, that two people sharing so much DNA and raised by the same parents in the same household could be so different from one another? How much were the differences innate? Had I contributed to making each child unique?  Had other factors played a part?

sisters, yes. the same, no.

The issue came up very soon after we became a family of four. Our oldest child, Kristy, never met a stranger. She happily greeted all human persons, willingly went to any open arms, and settled comfortably onto any warm lap. Kristy’s friendliness served as a strong contrast to the stranger anxiety exhibited by her sister Carrie, born when Kristy was eighteen months old.

Newborn babies normally are happy to be held, fed and kept warm by just about anyone. But a normal developmental pattern, stranger anxiety, can cause a formerly easy-going baby to become fearful at being passed to

unfamiliar arms. Instead, he or she turn into a sobbing, clingy mess. As stressful as this is for parents, it’s all perfectly normal. It demonstrates that the baby is beginning to order her world. One of his tasks is to distinguish the familiar from the unfamiliar. Ordinarily, adverse reactions to those perceived as “strange” begin when the baby is about six months old. By the time he is fifteen months old, they may hit their peak and then gradually wane away.

Well, Carrie hadn’t read any developmental charts before she came into our life. She was barely six weeks old before she greeted anyone but me with loud wails of protest. Well past her third birthday, she clung to me when Jay and I headed out for an evening, begging me not to go. Her separation anxiety was so extreme I felt that something in our environment must have reinforced it. Could her fears connect in some way to her older sister’s seizure disorder, a factor that had disrupted her life from early infancy?

Let me share a story that demonstrates that reality. One day in February, 1971, brands itself on my memory, but it was not so different than other like occasions.

At five that morning, I awoke to the sounds of Carrie stirring restlessly in her bassinet, next to my side of our bed. Within a few seconds, there followed little mewing sounds, not unlike those made by kittens. I pushed up against my pillows and reached over to scoop up the baby, swaddled in a flannel blanket. Her soft lips rooted for my nipple and she soon suckled quietly. Jay slept. I switched Carrie to my other breast. A few minutes later, satiated, she let go and her head slipped against the crook of my arm, her dark curls damp and tight. In slow deliberate motion, I slid toward the bassinet and slipped her against the Winnie the Pooh wedged in the corner. I could pretty much count on her sleeping until nine o’clock.  I could manage an hour’s rest before Kristy woke.

A piercing cry shattered the quiet. Kristy. I reached over and shook Jay’s shoulder and whispered so as not to wake the baby, “Kristy’s having a seizure.”

I darted out the bedroom doorway, across the hall and saw that her tiny form was arching so wildly in convulsions that her crib banged against her bedroom wall. Unclasping the side of her crib, I reached in and cautiously turned her on her side. Her small body felt on fire. “Get a cool cloth,” I commanded. I took it from Jay’s hands and wiped her forehead. I tried to slip her out of her nightgown, but her arms were thrashing too strongly for me to slip the sleeves down. The convulsions should have stopped by now.  The fever must be making them worse than usual.”

Within a minute Jay was back, without socks, but otherwise dressed. His feet will freeze I thought, but ran to our room, my heart pumping so hard I could hardly breathe.  You have to calm down I told myself. For just a few second, I stopped and gazed at the peacefully slumbering Carrie. I pulled some sweat clothes from a dresser drawer. I so wanted to leave the baby right there. Let her sleep. But I couldn’t.  I hurried back across the hall. Kristy’s seizure had stopped, but she was still burning and limp as a wet dish rag, completely knocked out rather than asleep.

Jay had picked her up and was cradling her against his chest. “Can you wrap her up?” I asked. “I’m going to take the baby over to Lucy’s house.” He nodded. With a heart as heavy as lead, I lifted Carrie. She woke and began to whimper as I took her downstairs and struggled her into her tiny snowsuit, whispering, “You’ll be okay” again and again. Was I soothing her or me?

A few minutes later, my neighbor Lucy opened her door.

Before she could say anything, I blurted out, “I need you to take Carrie. Kristy is really sick.  We’re taking her to the hospital.”

Without another word, Lucy reached for the baby, but I held tight for a few more seconds. “I’m sorry,” I whispered to her.

It was late afternoon before we returned from the hospital. Kristy’s fever had resulted from a bronchial infection. Acetaminophen had reduced her fever. The doctor prescribed an antibiotic for the infection. She’d recovered he assured us, but also expressed concerns about the length and intensity of her seizure.

At home, I carried the exhausted, but now smiling Kristy up to bed while Jay walked down the block to retrieve Carrie. I collapsed into the rocker in the corner of Kristy’s tiny bedroom.  Keeping her on my lap, I took a large illustrated Winnie the Pooh from the shelf built into the wall, and began to read her favorite rhyme, “Hush, little baby.” While I read, I listened for the sound of the front door. Was Carrie, okay? She had never been away from me before.  The bottle of formula I’d handed Lucy that morning would be Carrie’s first bottle feeding. Had she accepted it or gone hungry?  My breasts ached where Kristy’s delicate body slumped into mine.

As the front door opened, I heard the wind knock it against the foyer wall with a resounding thud.  Louder yet was the baby’s wail. Oh, Carrie, my heart called. Kristy’s eyes were drooping.  Trying to be careful, I slid her into the crib.  “Mama,” she pleaded and reached a little hand toward me. The baby’s cries became louder. Jay was probably at the bottom of the steps. “It’s okay, sweetie. Time to sleep.” I turned.  Was I forever going to be telling my children “It’s okay” when it wasn’t? 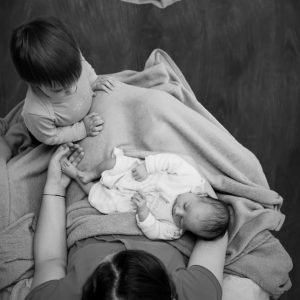 Sure enough, Jay stood at the foot of our front staircase. His hair swiped back from his forehead, stood on edge. In one hand, he held out the full bottle of milk and his head was shaking slowly. My gut churned. I went down so fast I had to grab the rail to keep from careening into him. I scooped Carrie out of his arms, shook her little snow suit off of her, and carried her to the living room. Within seconds she was under my sweater, nursing her little heart out. “I’m so sorry.” I whispered, resolving never to disappear on her again.

It was a promise I couldn’t keep, but she did accompany me to the hospital as often as possible after that. But even that wasn’t an optimal environment for a baby inclined to be shy and fearful.  Recent behavioral scientific theory that my instinctive concerns might have been on target.

Genetically siblings share 50 percent of their genes, but “just one gene in a sequence of genes can change the outcome entirely.”

This phenomenon, emergenesis, occurs “when a trait is determined by a particular configuration of many genes. That specific combination of genes then leads a person to display a particular characteristic.”  Intriguingly, that characteristic may not be exhibited by anyone else in the person’s family.  Further research has indicated that extraversion and introversion are commonly emergenic traits.  Thus, it’s not at all unusual that Kristy would have been such a total extravert while her little sister clung to the other end of the social arc.

For Jay and me, letting Carrie go at her own pace turned out to be the best parenting answer. Despite her initial shyness and fear of the unfamiliar, Carrie grew into a strong, intelligent, beautiful, competent woman who climbs mountains, rafts rapids, makes loyal friends for life, and is a wonderful wife and mother.