Back to Grade School 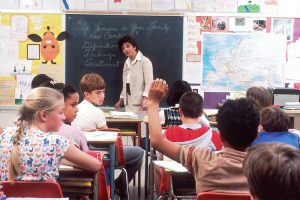 I leaned back against the hot yellow brick, slid my hand into the inside pocket of my suit jacket, and slipped out a thin, solid cigarette and dug a little deeper for the book of matches, my husband had brought home from some south side bar. I needed this brief respite. Before striking the match, I edged to the corner of the school building and scrutinized the playground milling with shouting, running children. Red-headed June Hurtgen, the second- grade teacher caught my stare and gave me a quick thumbs up.  No nuns in sight.

The long inhales of nicotine-laden smoke gradually soothed me enough to face the post-lunch classroom. I closed my eyes against the bright sunlight of the early spring afternoon. I wished I didn’t have to move.

Afternoons were always more chaotic than mornings. The baseball games and hopscotch matches that filled the midday recess fueled the student’s energy. Settling them down, getting them to pay attention to the afternoon classwork, would challenge me intellectually and exhaust the last of my physical energy. The bell rang. I dropped the cigarette and ground it into the dirt between two dandelions, bravely pushing their way through rock hard soil. I didn’t have their resilience. How had I gotten myself into this?

Easy answer – Bored stiff staying at home after leaving my position as a caseworker for Cook County Children’s Division, I blithely, naively decided that teaching in grade school would be a less stressful occupation. In ordinary times such a choice would have required a return to school to earn a degree in Elementary Education. But, the late 1960s were far from “normal” times. Every aspect of human culture, social, commercial, political, and religious, spun in an unfamiliar vortex.

For Catholics across the world, the end of the Second Vatican Council brought a new wind streaming through church doors and windows.  Century-old practices changed overnight. Each officially-initiated change brought on other unexpected changes.  This revolution hit the American Catholic school system at its very core – the cadre of teaching nuns, who had for decades taught the children in these schools.

The council documents had encouraged lay people to be much more self-reflective about their faith. Many nuns found, upon deep reflection, that opting for the single, celibate life when they were barely out of childhood had not been an authentic choice. Dozens of women left the convents around the country. The numbers of sisters abandoning the religious life would snowball in coming years.  In the late 1960s, staffing Catholic schools entirely with nuns became suddenly impossible.

The archdiocese of Chicago responded to the crisis by seeking lay persons to teach. But with schools, both public and private, bursting at the seams, trained teachers were hard to come by.  The archdiocese introduced a summer program to college graduates without degrees in education to teach in grade school. A band-aid solution at its best, this temporary measure attracted the delusional and the directionless, the cohort into which I fit so well.

In the summer of 1967, I attended this boot camp for teachers. In August, a position for a sixth-grade teacher opened up at St. Henry’s School. During my interview, Sister Felicity, the principal, warned me that sixth grade is a uneasy year, a changeover time as students move restlessly from childhood to early adolescence. She clearly had concerns about my lack of experience, but she was desperate. I had done well in the summer program. I wasn’t fresh out of college as many applicants were. Most likely her fingers were crossed behind her back when she handed me the key to “my” room.

Undaunted,  I spent the last week of August decorating the bulletin board and carefully honing my lesson plans. The room looked warm and welcoming – the perfect learning space.

The Tuesday after Labor Day introduced the less than perfect element – the students. Had I really thought that 30 boisterous eleven-year old kids would quiet down simply because I asked them to? As the weeks progressed, I painstakingly built individual social contracts with each student. That enlightening, but lengthy, process played serious havoc with my carefully wrought lesson plans.

The Ides of March

Now in mid-March, the whole class was seriously behind in our learning goals for the year. I dragged my feet up the creaking wooden steps to my high-ceilinged, second-floor classroom, certain that again today  I would be compelled to spend far too much time helping individuals with particular problems, listening to a slow crescendo rise as twenty-nine other young minds veered off track.

They didn’t disabuse me of my preconceived fears. Students, who weren’t chatting with a seat mate or whispering loudly across the aisles, wandered away from their desks – not out the door where they were sure to be spotted by a hall monitor, but up to the pencil sharpener, the school supply case, or the small corner where I stashed books for free reading. None of these actions was exactly forbidden. But they were meant to be rare, not the order of the day. Bent over the work of one student, my back aching like an old lady’s, I stood every other minute and directed the wanderers back to their place.

I liked these kids. I wanted them to have a solid educational foundation. But by now, I had serious doubts those goals could be met.  I felt more like the 9-to-3 babysitter than an actual teacher. The students didn’t dislike me.  In fact, they often followed me home and we had great discussions around the small garden in front of my apartment building. Nor were they learning disabled. Some struggled with one or two school subjects, but for the most part they were bright as new pennies. The sad truth was they had my number.  They had sensed right from the beginning that I was not just new to them, but new to teaching and basically clueless. Once this underground message permeated my classroom, none of the “tricks of the trade” I tried 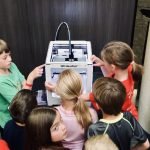 worked. The experiment was blowing up in my face.

All of this was running through my head while I helped Tess Balsercak, my best student, locate the edition of the encyclopedia she needed for a report. Behind me, the usual scuffs and whispers transformed to a low murmur of giggles. I laid the heavy red volume into Tess’s small hands and turned to scan the classroom.

No one was out of their seat, but one desk was empty. Tommy O’Brien. Tommy had come in after lunch, but now he was missing. And something smelled funny. Most of the students attempted to look busy, either rifling through the pages of a book or scribbling with a pencil, but enough of them kept glancing over their shoulders at the cloakroom to at least assure me that Tommy hadn’t gone completely AWOL. Although his attendance record was poor, he’d never simply left in the middle of the day before.

Tommy lived with his mom and her boyfriend, a home situation becoming more commonplace as the 1960s grew to a close, but one that still shocked me somewhat. I worried much more, however, about his practice of skipping school to wander the streets of “Old Town,” in that decade a favor haunt of the counterculture. Within a few minutes most students became aware of my scrutiny. As though drawn by puppet string, their heads turned toward the rear cloakroom door. Two quick strides brought me to the front entry. There the heady aroma of cannabis vied with the classic cloakroom mix of dirty jackets and mud-covered boots. Tommy leaned against a navy wool coat, his head flung back, his eyes closed, a smile like a cherub barely part his lips, which blew out a small stream of smoke. My gut twisted. Was that how I’d looked, hiding behind the school? But wait. It wasn’t the same!

His eyes flew open, their merry blueness as charming as ever. His smile remained. “Hi, Mrs. Ward.”

“Put that out. We’re going to the principal’s office.” If I could have covered it over, I probably would have. Being expelled would delight Tommy, but was the worst thing that could happen to him. As I marched him out of the cloakroom and straight into the hall, total chaos erupted behind me. It was the least of my concerns right then.

Sister Felicity and I waited together until five o’clock for Tommy’s mother to retrieve him. She stomped into the office, her brilliantly blonde hair fell in heavy waves down both side of her face. Tommy had gotten his beautiful eyes from her and even though upset, her voice lilted like music, “What’s this all about?”

When Sister explained that Tommy would be on a one-month probation, she looked at him, shrugged her shoulders and sighed, “Well, let’s get you home.”  And another vulnerable child walked out of my life, but never out of my memory.

There were almost three months of school left. The children would, I knew, believe I had deserted them, but I knew I had to leave. I realized I couldn’t teach in elementary school. I just wasn’t good enough.  That I had received the proper training was a basic fact.  But there was more to it than that. I still struggled with a demon that had plagued me longer than I could remember. I had a desperate need to be liked and I often sacrificed greater principles to that need.  Wanting so much to have the students like me, I had forfeited their respect.  Once gone, it could never be reclaimed.  Without it I couldn’t be an effective classroom teacher. I needed to open the space for some one else.  I had to hope that teacher would be better than me.

If I stayed, it would do the children no good, and I would break under the heavy load of self-doubt I took with me into the school building every day. That Friday, I handed in my resignation.

Love Lessons, I learned, are not just about commitment to others, they can also be about our relationship with our self. 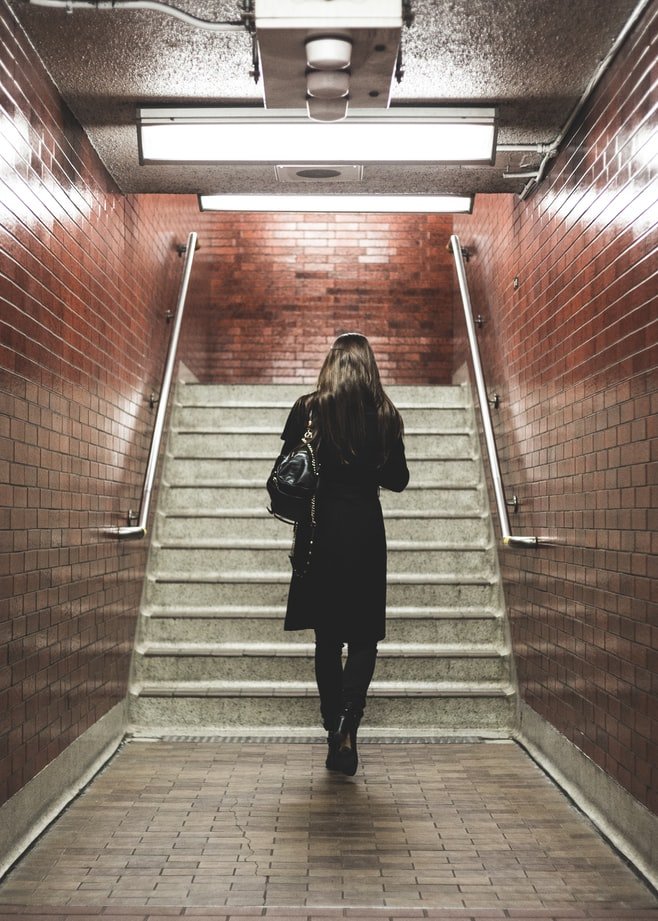 Have you left some one or some place because it was better for them that you leave? Could you share that here?

Or less personally, who was your favorite grade school teacher and why?

Education is an admirable thing, but it is well to remember from time to time that nothing that is worth knowing can be taught.” ~ #Oscar Wilde